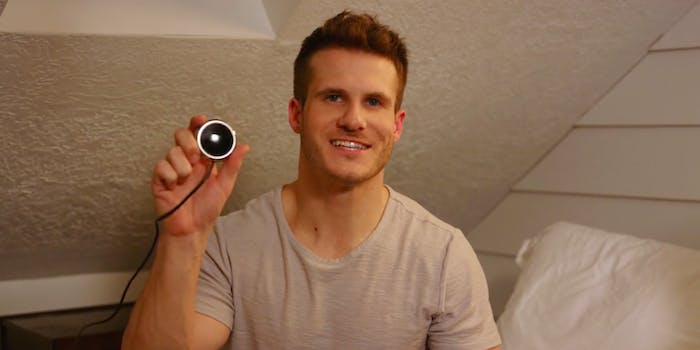 This Kickstarter for LoveSync sex buttons is really bad

'Desire may be canceled.'

Millennials are having less sex than previous generations, and there’s a Kickstarter that wants to help. It was launched this month by a company called LoveSync that has created buttons to press when you want to have sex with your partner. The Kickstarter says LoveSync is “an entirely new way to increase your sexual frequency and boost your romantic relationship with the simple press of a button.” But people on social media just think it’s absurd.

Here’s how the buttons work: you and your partner each place a USB-powered button on your bedside table. When you want to have sex, you “anonymously” press the button. If your partner also presses the button at the same time, a green light will pop up, indicating it’s time to shag.

I truly cannot think of anything less sexy than initiating sex with a button. The project was thoroughly mocked on Twitter.

i dont want to discuss any of the news today, only this incredible kickstarter for actual adult humanshttps://t.co/zGiOnmBl89

it really gets me going when a man calls upon me to deliver sex by wordlessly pushing a usb-powered button https://t.co/kZEttzdpMV

One feature of the product is that you can “cancel” your desire by holding down the button for four seconds. Yes, really.

DESIRE MAY BE CANCELED USING A 4 SECOND BUTTON HOLD https://t.co/8zTV9xupFU

One person pointed out the real issue with the sex buttons. Although it’s being sold as something that will make your sex life better, if you can’t talk to your partner about your sexual wants and needs, you have a bigger problem.

“lmao this is so fucking stupid. If you can’t communicate with your partner about fucking, then a button isn’t going to help,” Twitter user @theapthomas wrote.

lmao this is so fucking stupid. If you can’t communicate with your partner about fucking, then a button isn’t going to help https://t.co/W35DJnuIOR

This sounds a lot like the beginning of a weird Black Mirror episode where sex is automated like an iPhone update. And that’s really just not a world I want to live in. For that reason, I’m out and I hope this Kickstarter doesn’t get funded. As of Monday afternoon, 32 people have backed the project, pledging $1,851. The fundraising goal is $7,500. The cheapest pledge for a pair of the LoveSync buttons is $44.