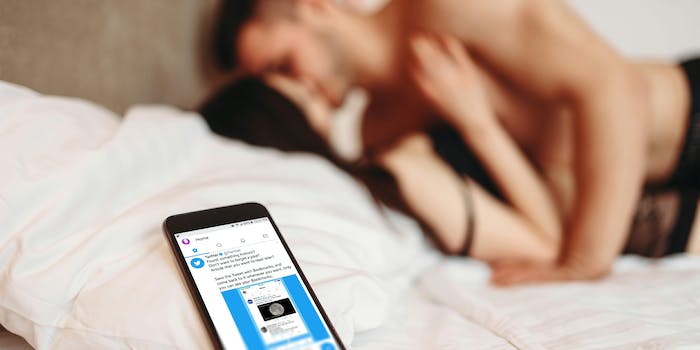 A new study says we'll willingly give up alcohol, though.

Our addiction to social media is well documented. Studies have compared its neurological effects to those of cocaine, with some research suggesting that it’s replaced alcohol and drugs as the vice of choice for today’s youth.

Well, now another survey has arrived to corroborate what many both inside and outside the tech industry have long argued. Instead of pointing to our chemical pathways of dependence or simply concluding that we are indeed addicted to Facebook and Twitter, this new survey unpacks our addiction in terms of its likely personal and social consequences. And while the results do suggest that we’re far more attached to social media than is probably good for us, a more careful reading shows that there is still some hope for the human race yet.

Conducted by YourStorageFinder.com, the survey asked 2,000 Americans: “Would you rather give up x or give up social media for a year?” It then went through a list of 14 sacrifices, finding that the biggest percentage of us, 57 percent, would be willing to renounce alcohol for a year in order to keep posting and tweeting.

Other results were more unexpected. 36 percent of respondents answered that they’d be willing to put on 10 pounds in order to remain on social media, while 20 percent would happily go without sex for a whole 12 months.

More worryingly, 14 percent of respondents would prefer to stop having any kind of face-to-face contact with their friends. Not only is this higher than the percentage of people who’d be willing to give up half of their belongings (8 percent), but it indicates that social media has become more indispensable to many people than the very thing—”real life”—it’s supposed to enhance and facilitate. We would apparently care more about the representation of our lives than its lived reality.

Commenting on such results, Your Storage Finder’s data analyst, Cindy Glover, said, “There were a lot of surprises in the study. We knew social media was important to people, but we didn’t expect that 1 in 5 Americans would rather give up air conditioning or sex than their Facebook or Instagram accounts.”

However, Glover shies away from proposing any specific remedy to social media dependency. “We wouldn’t presume to offer prescriptions for how society can decrease its dependence on social media,” she says. “It was clear from the results of our study that people are getting something from it that they value, but almost half of our respondents had taken a break from it at some point.”

This is an important fact to remember when evaluating the deeper significance of the survey and studies like it. 49 percent of people told Your Storage Finder that they’ve taken at least one break from social media due to concerns over its impact on their lives, underlining the growth in public recognition of the potential ills of social media overuse.

“Overall, people told us that the real world still matters a lot,” Glover added. “Our society has changed mind-bogglingly fast over the past decade or so, but real experiences, face-to-face interaction, and personal belongings are still important.”

It’s also worth pointing out that the survey itself has limitations that would prevent us from drawing any definitive conclusions. It quizzed only 2,000 people, which, for a population of roughly 320,000,000, would give a confidence interval of approximately 2 percent when operating at a confidence level of 95 percent. And when it’s taken in conjunction with the fact that the survey accounts for neither race nor income (though respondents do represent a range of ages and a near even split between men and women), it suggests that the results might be skewed somewhat toward particular groups of Americans at the expense of the country as a whole.

More tellingly, there’s also a good chance that many of the survey’s respondents were willing to “give up” activities they weren’t doing anyway. For example, even though 57 percent of people are self-reportedly ready to forgo alcohol for a year, only 56 percent of people in America have had an alcoholic drink in the past month, according to the 2015 National Survey on Drug Use and Health. A similar pattern is observable with the sex question, as shown by the infographic below.

And lastly, there’s a growing body of evidence that contradicts any doom-and-gloom story extractable from the survey. For one, Facebook lost 2.8 million users under-25 in 2017, substantiating reports that young people are starting to turn away from social media in general. One 2017 study from the National Opinion Research Center in Chicago, for instance, found that nearly 60 percent of U.S. teens have recently taken a break from social media, while in the U.K. another study saw 63 percent of students professing that they wouldn’t care if social networks didn’t exist.

This all goes to suggest that, while a portion of us do indeed have too much of an existential reliance on social media, the vast majority of people still prefer reality when it isn’t filtered through the auto-validating lens of our Facebook and Twitter profiles. And given that bona fide campaigns are now being launched over the harm tech giants could be causing the “fabric of society,” it’s likely that if Your Storage Finder updated its survey a year from now, the results would be more encouraging rather than less.