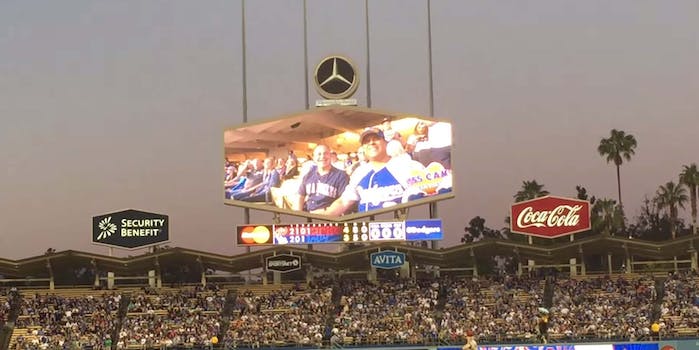 On Saturday, the kiss cam at Dodgers Stadium caught two men very clearly in attendance to watch the Los Angeles Dodgers play the Arizona Diamondbacks as a couple. It proceeded like most kiss cams at stadiums do—lingering until patrons smooched their neighbor.

When the men kissed, noticeably raucous cheering filled the grounds.

It was an uplifting addendum to a weekend dominated by sports spectacle. Hours later two archaic thinkers—boxers Floyd Mayweather and Manny Pacquiao—engaged in a heist that worked millions into their net worth. It was a moment that hijacked American culture and relegated everyone to a pay-per-view sparring match between grinning cowards who tapped in neutral, knowing that the purse was secured.

Celebrities crowded around the ringside campfire. There was Burger King performance art and an over-served Russell Westbrook.

Web dissenters framed the conversation around Mayweather’s troubling and seemingly unrepentant history with domestic abuse. Rightfully so—allowing a Super Bowl-level chunk of entertainment to occur in a bubble is a disservice to the boxing’s complex, polarizing history of villains.

Of course while indignant moralists derided Mayweather and the event in general, few vocalized a second thought to the plight of gay men in American sports. Both Mayweather and Manny Pacquiao are viciously homophobic bullies. Didn’t matter, most Americans saw enough charisma in Pacquiao to anoint the challenger as the night’s sympathetic hero.

But at least that gimmicky, downtime kiss camera restored our faith in humanity.