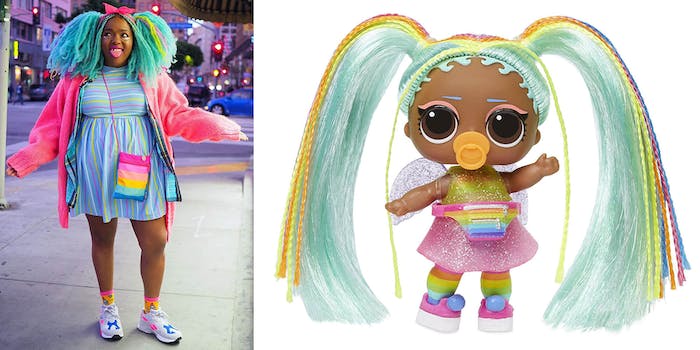 Artist says L.O.L Surprise doll was made in her image without credit or compensation

In response, the company's founder called her a 'disgrace to Black people.'

Isaac Larian, the founder of toy company MGA Entertainment which is responsible for both Bratz and L.O.L Surprise! dolls, called Black artist Amina Mucciolo a “disgrace to Black Lives Matter.”

He was responding to a claim of copyright infringement that she leveled against him on Thursday.

Mucciolo, who has previously raised a similar complaint against the Lisa Frank corporation, said that the company modeled the Rainbow Raver L.O.L doll in her image without her permission. The artist said she has not received credit nor compensation for the look-alike doll.

After making multiple attempts to contact MGA Entertainment in order to resolve the issue and seeing Larian’s multiple tweets in support of Black Lives Matter, Mucciolo decided to make the issue public in an Instagram post. In it, she detailed a timeline of her involvement with the company prior to the creation of the doll.

The company reportedly collaborated with Mucciolo when she guest-starred on a children’s YouTube show about interior design. L.O.L. Surprise! also followed her on social media, where she posted images of herself with her iconic bright blue hairstyle and her usual rainbow outfits. Two months later, in July 2019, the company released the Rainbow Raver doll whose appearance bears a striking resemblance to Mucciolo’s.

Mucciolo’s Instagram post describing the situation was taken down. She alleges that Instagram removed the photo after MGA filed copyright claims on the doll from her post. Undeterred, she went out and acquired one of the dolls so that she could upload her own photograph of it. She reposted her complaints against the company on both Instagram and Twitter.

Shortly after making the post, Mucciolo added an update asserting that MGA made a “very aggressive attempt to contact us” and were “spreading lies about me and my motivation in bringing this issue to light.” In response, she and her partner hired a lawyer.

This claim seems to refer, at least in part, to Larian’s behavior. The founder rapidly responded to her claims on Twitter with insults and accusations of his own. He called Mucciolo a “#LIAR and a #Extortinist and #Fraud.” Then, he went on to demand that she share her lawyer’s information publicly so that he could contact them.

“Now we will no longer be nice and we will sue you for defamation, extortion, fraud, etc. Watch!” he wrote.

Larian went on to say that the doll was designed by “talented BLACK designer” Shir Ami before Mucciolo adopted her blue pigtails.

But he wasn’t just making statements about the doll. He accused her of attempting to profiteer off the Black Lives Matter movement.

While Mucciolo herself didn’t attempt to connect her claims to the Black Lives Matter movement, she did reference the posts Larian and his company have been making both in support of the movement and diversity in general.

“This behavior alone is obviously predatory and reprehensible, but the fact that they had the nerve to make a lazy post claiming to care about injustices done to Black people proves that they are also liars,” she wrote.

Many Twitter users responded to Larian’s remarks. They pointed out how it’s inappropriate for a non-Black person––even for a person of color (Larian is Iranian)––to speak on a Black movement and what is and isn’t acceptable within it.

Many people said his behavior prompted them to boycott the company, saying they will never buy toys from MGA Entertainment again.

People who have previously worked for or with Larian have also come forward to accuse him of racist and abusive behavior in the workplace. Many people also said he’s quick to sue.

Twitter user @renaissancegoth told the Daily Dot that Larian heavily micromanaged a commercial her mother’s company produced for him (that the then ten-year-old @renaissancegoth starred in) only to turn around and refuse to pay because “it’s not the way he wants it.” According to @renaissancegoth, MGA lost the case in court and was forced to pay out, though the commercial was never aired.

Since the news began to circulate, he has responded to multiple critical tweets with a link to an Instagram post about MGA Entertainment’s commitment to diversity and the personal pain Larian says he feels when people “try to scam and profit from movements such as Black Lives Matter.”

The Daily Dot has contacted MGA, Amina Mucciolo, and Shir Ami and will update the article when we get a response.