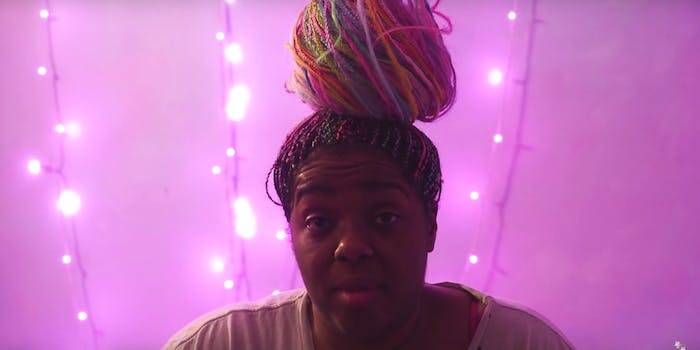 Instagram influencer Amina Mucciolo (Studio Mucci or tasselfairy) is not only accusing renowned designer Lisa Frank and Hotels.com of stealing her whimsical apartment design but is also claiming they are the reason behind her eviction.

“I just want to understand where’s [sic] she’s coming from, and why this happened this way. I would like her to admit that she used my work, that she saw my place and wanted to do the same thing,” Mucciolo said in an email to the Daily Dot.

The “Lisa Frank Flat,” a pop-up rental, sold out within an hour of the reservation opening on Friday via Hotels.com, USA Today reported.

It’s billed to evoke “’90s nostalgia” with its Lisa Frank-theme–the same one that decorated all your favorite school supplies as a child–permeating the apartment’s decor. Yet many fans are noticing similarities to Mucciolo’s work.

Mucciolo’s apartment design has been made very public. She created YouTube videos about it and Instagrammed it as far back as its inception in 2017. The apartment’s virality has also been the source of several articles.

When the Daily Dot reviewed the same photo on Frank’s Instagram account Monday, there were allegations that Frank was deleting comments.

“They stole this design from tasselfairy. Every time someone post about it they erase it but you can go to her page and her YouTube and see her well-documented design,” one user wrote.

In a YouTube video posted on Saturday, Mucciolo detailed the similarities between Frank’s space and her own, highlighting that the kitchens are especially similar.

“Biggest similarity is the kitchen,” Mucciolo says at the beginning of the nearly 30-minute long video. “It’s the same layout as our kitchen … It’s impossible for the similarity to not be drawn.”

Her subscribers seem to agree with her. “The kitchen is soo obvious!!!” one commenter wrote under Frank’s Instagram photo.

Later in the video, Mucciolo claims her landlord is now trying to evict her because of the Frank flat. Mucciolo says she sometimes pays rent late due to mental health issues, but her landlord “always accommodated every late payment.”

“This last time we needed to pay late but were refused,” she says.

The apartments are within the same development, and she says they want the Frank flat to be a one of its kind.

“My landlord is evicting me so that … they can capitalize on having … my idea and recreate with Lisa Frank [and] Hotels.com and have people stay there instead of having a tenant with that kind of space,” she says. “And basically by them evicting me they know that they’ll be the only people [with] a place that looks like this.”

She also posted photos of the two apartments side-by-side on Instagram.

Hotels.com addressed the allegation by responding to one of Mucciolo’s tweets.

“We love that you appreciate colorful design as much we we [sic] do, but this flat was curated exclusively with Lisa Frank’s iconic signature prints & characters. It was custom built for the two-week pop-up room at a short-term rental unit owned by one of our partners,” Hotels.com wrote in the first tweet.

Update 7:59pm CT, Oct. 14: A Hotels.com spokesperson told the Daily Dot that Mucciolo was not getting evicted because of the flat.

“The Hotels.com Lisa Frank Flat was inspired solely by Lisa Frank and designed in partnership with Lisa Frank using her iconic signature prints and characters, many of which were originally developed in the ‘80s and ‘90s. The flat was created for a two-week pop-up in a space that is used only as a short-term rental and no tenant was asked to move or leave for this collaboration,” the spokesperson said in a statement.

(2/2) We’re really sorry to hear of the situation with your landlord, but this is unrelated to the https://t.co/J4tvzOhRUP Lisa Frank Flat. We hope you are able to resolve the issue with your landlord soon and wish you the best.

Mucciolo started a GoFundMe to raise money so that she can pay for legal defense and find a new place to live. She has raised nearly $13,000 of her $20,000 goal from over 500 people in just a day.

According to the GoFundMe, Mucciolo’s landlord “refused to accept our rent payment. We begged and pleaded to try to see if there was anything that could be done, because we didn’t understand. When we tried they threatened us and they demanded that we leave immediately or they would ‘make things very difficult for us.’”

She also said that the Frank flat is “owned by the same people trying to evict us.”

The Daily Dot has reached out to Lisa Frank and Hotels.com.