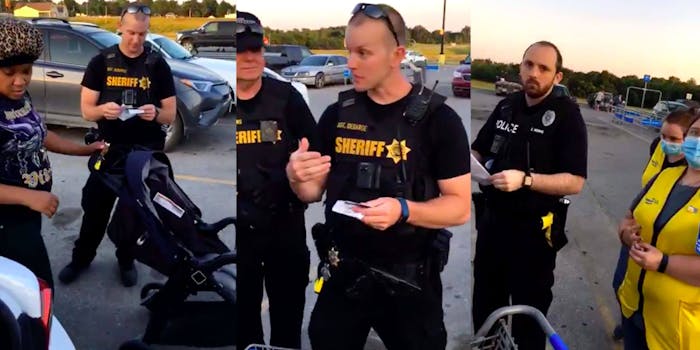 A video shows it apparently took three officers to 'investigate' the receipt.

A family leaving a Walmart in Kansas was stopped by police and accused of shoplifting.

A viral video of the incident, with over 1 million views on Twitter, begins with the police officers surrounding the family’s car, saying they are “investigating” the receipt. It apparently took three officers to investigate it.

“Somebody help me out I was racially profiled and publicly humiliated,” the video’s caption reads. It was presumably posted by the father in the video.

The father can be heard at the start of the video explaining the situation at hand. He says the cops are accusing them of stealing groceries. One of the officers can be seen holding the receipt. Throughout the video, the officers are relatively quiet until one of them asserts that they “don’t know” if the family paid for the groceries and are “investigating” the receipt.

The same officer claims they got a call about shoplifters. “This dude got my son out here in the heat … over $100 worth of groceries that they think I stole because I’m Black,” the father says in the video. A woman with a stroller can also be seen in the video. The family appeared to be in the process of unloading the groceries into their car.

Both of the officers stay silent, and one of them smirks. The father continues to ask why they are “investigating” when they have the receipt in their hands, but the police continue to say they are doing their job.

“Isn’t your policy to stop customers at the door if they are suspected of shoplifting?” he later questioned Walmart on Twitter. “Why were the police waiting for me outside because of a phone call from one of your employees?”

The father also wrote that his 3-month-old son developed a heat rash after he was forced to keep his son in the car and was not allowed to start the car while the police “investigated.”

The Daily Dot has reached out to Walmart and the family involved in the incident.