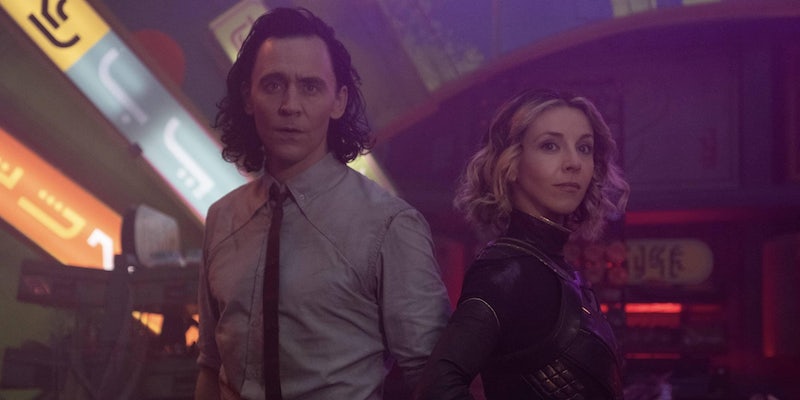 Loki‘s third episode had a strong Doctor Who vibe, beginning with its main location: an alien planet in the midst of an apocalypse, where the outdoor scenes look like they were filmed in a quarry. A sci-fi TV classic!

Arriving through a portal in space and time, Loki and Sylvie (aka Lady Loki, played by Sophia Di Martino) discover they are stuck on Lamentis-1, hours before the planet is due to be obliterated by an exploding moon. Neither character is naturally trusting or trustworthy, but they’re forced to work together to escape. Their plan takes them across a desolate alien landscape and onto a luxurious train, destined for an ark ship that will hopefully let them flee to safety. But since this is a story about Loki, every step of the journey is (of course!) beset by mishaps and chaos.

Like the first two episodes, this new chapter is carried by Tom Hiddleston’s charm and expertise, with Sylvie as an appealingly mysterious foil. It’s a fun little two-hander, but it continues the show’s habit of rather shallow storytelling. Throughout the MCU, there’s a running joke that Loki is eternally unreliable, including to himself. His plans invariably end in disaster, but he always finds a way out—usually by creating another disaster. A rube goldberg machine of comedic self-sabotage. This idea continues in his Disney+ show, but it’s executed in the simplest way possible. Loki disguises himself as a stranger but is immediately unmasked. Loki sneaks past some train guards, but can’t resist getting drunk and drawing attention to himself. Basically, while it’s always enjoyable to see Loki fail and get his comeuppance, the show is doing a lackluster job of depicting the part that comes before this: Loki being a clever, inventive strategist.

Written by Bisha K. Ali, showrunner of the upcoming Ms. Marvel adaptation, episode 3 represents my main desire for Marvel’s Disney+ shows: character-driven storytelling. The setting is just a framing device for Loki and Sylvie to hang out for half an hour, a cat-and-mouse dynamic where they each try to weasel some useful information out of the other. I only wish it was more subtle, because Sylvie and Loki’s conversations mostly consist of very straightforward Q&As. Not exactly peak performance from the God of Lies, although it’s cool to hear that Loki is now officially, canonically bisexual.

As a rule, Loki’s role vacillates between three points: petty trickster, ambitious villain, and wounded antihero with abandonment issues. In Loki, his fun-loving prankster side barely exists in the script, mostly drawn out through Hiddleston’s performance. The show prefers to focus on his vulnerabilities, but like WandaVision, it does this by stating a basic theme and then failing to dig any deeper. We already know that Loki is an outcast who misses his mother! Go deeper, please! As a result, the interplay between Loki and Sylvie only tells us one thing: that Loki’s emotional issues make him easier to manipulate than the reticent Sylvie. The manipulation itself is not very interesting, simply encouraging Loki to rehash more of his backstory.

At this point in the timeline, Loki is motivated by a lack of direction. He’s decided he wants to conquer the TVA because that’s where he’s landed, but this is clearly a foolish goal. In the event that he did succeed, why would a trickster god want to lead bureaucracy-laden police station? Without Thor or Asgard in the picture, this version of Loki is trying to forge a new identity and power base. So far, so good. But it’s weird to see him do this with so little attention paid to his sense of humor. Why isn’t Loki messing with more people for his own entertainment? Where’s his playfully mean side? And, for that matter, where’s Sylvie’s? The Loki v. Loki dynamic is a clever conceit, but right now Sylvie is being positioned as the more serious or two—not the most satisfying of introductions for a female lead.