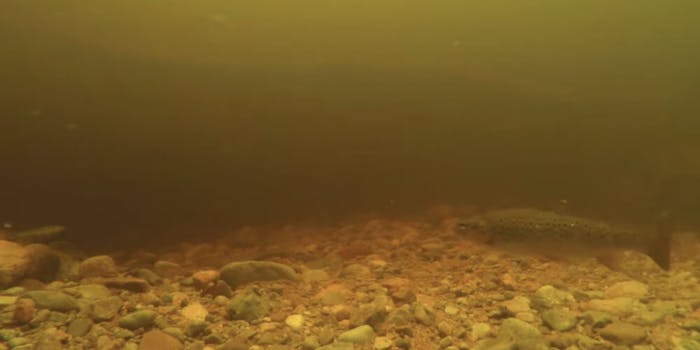 It's also not the only alleged recent water monster sighting.

In early September, researchers who performed a DNA analysis on the waters of Loch Ness in Scotland announced that the Loch Ness monster is probably just a very, very large eel. Now, it seems that a video, taken a few days prior to the report’s release, adds some credence to that theory.

The video was taken by the Ness District Salmon Fishery Board, a non-governmental organization (NGO) that manages salmon and sea trout fisheries in the area, on an underwater camera used to monitor the waterways. The video foggily shows a very long eel-like creature in the waters of the River Ness, which flows out of the loch toward Inverness.

Though it probably does not exceed the 5 feet European eels can reach in size, it’s still an ominous sight, as most eels do not.

It’s also not the only alleged recent water monster sighting. Another video, purporting to show a monster similar to Nessie, was released out of China. Whether a relative of Nessie or Nessie simply on vacation, the video remains to be explained.

It shows something of large size rapidly slithering through the Yangtze River, near a highway.

Does the Loch Ness Monster have a Chinese relative?! pic.twitter.com/F7bQ5vgMuK

Millions of Chinese social media users have become captivated by a video shared online that appears to show a "water monster" slithering through the waters of the Yangtze River.https://t.co/bu2dFRFQ7p