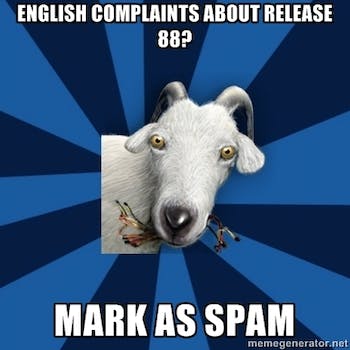 A redesign is meant to highlight the social blogging service's thriving communities. But some are displeased.

LiveJournal, the granddaddy of all social networks, is beginning a revamp to focus on its communities—whether users like it or not.

The Daily Dot first reported on these coming changes in December.

With a new homepage feature called LiveJournal Today, the social network is embracing its shift from personal blogging site to community hub by highlighting popular topics. According to Tom Byron, LiveJournal’s director of online marketing, this is the first of many changes to come.

“What you see on the homepage is sort of the important first step toward redefining LiveJournal to what it truly is: a community-based social network, with a trove of user-generated content that demands better ways to be discovered and accessed,” he told the Daily Dot in an email.

Livejournal Today is part of Release 88, a package of new additions to the platform that include a redesigned commenting page and entry-editing system.

But in what seems customary with any social network’s redesign, LiveJournal users are furious about these changes. LiveJournal Community Manager Mark Ferrell’s journal post about the release incited nearly 10,000 negative comments. Users were primarily upset about the new commenting system, which slowed down loading times and made it impossible to edit comments once they were posted.

Since then, LiveJournal has announced patches to improve the commenting system, but users are still concerned about future updates to the service. Word has gotten out among the userbase that LiveJournal will be redesigning the whole network.

“Our overlords are also planning on redesigning the whole site—how about you tell us about that NOW LJ??? russians have a sneak preview…..it was linked to another journal here…..” misstiajournal commented on the Release 88 journal post.

LiveJournal has been owned by SUP, a Russian Internet company, since 2007, and its market penetration in that country is much higher than in the United States. Since 2009, product development has been run out of Moscow.

A sneak preview (written in Russian) reflects the features LiveJournal general manager Anjelika Petrochenko shared with the Daily Dot last month. It shows rankings of popular journals and communities as well as the most-commented posts of the moment.

Commenters say this preview is available to LiveJournal beta testers. The Daily Dot hasn’t been able to confirm this through testing or with LiveJournal representatives.

If an English-language version of the features shown in this preview is forthcoming, it would certainly fit with what LiveJournal’s Byron has told us about the platform’s aspirations to further highlight communities and discussion.

“I’ll tip my hand and tell you that in a real sense, we aspire to become a Huffington Post for communities—LiveJournal communities,” he said. “Our communities form the core of what LiveJournal is all about—we are finding improved ways to bring them more to the surface.”

Image via Fuck No Frank