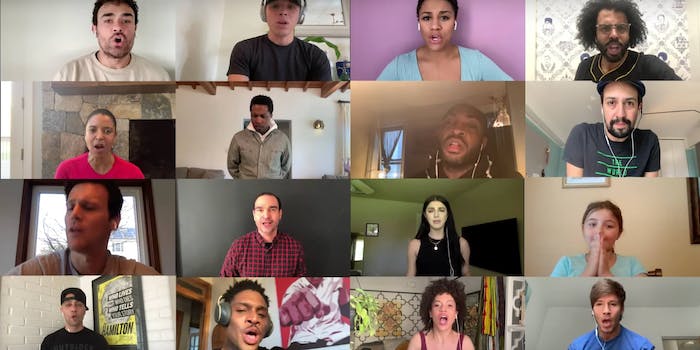 They put on a show.

One girl’s dream of seeing Hamilton live was dashed because of the coronavirus, but with some help from John Krasinski, she got the next best thing: a live performance from the original Broadway cast of Hamilton on Zoom.

Over the past couple of weeks, Krasinski has been hosting Some Good News, a sort-of newscast on YouTube in which he offers moments of levity in darker times.

In the second episode, he introduced his audience to Aubrey, a 9-year-old girl who had tickets to see Hamilton but wasn’t able to go because she and her mom were staying safe at home. Although Aubrey’s mom directed the message toward Lin-Manuel Miranda, it came onto Krasinki’s radar after Aubrey’s mom mentioned that they were watching Mary Poppins Returns, which stars Miranda and Emily Blunt (who is also Krasinski’s wife).

First, Krasinski pulled a string or two to get Blunt to join in on the video chat where they give Aubrey tickets to see Hamilton in New York once it’s safe to do so again. Miranda joins the chat, which leaves Aubrey speechless. And then there’s the chaotic good version of a Zoombomb as several original cast members of Hamilton—including Daveed Diggs, Christopher Jackson, Philipa Soo, Anthony Ramos, and Okieriete Onaodowan—join the chat to perform a live rendition of the musical’s opening number, “Alexander Hamilton.”

It’s both delightful and extremely earnest. With the theatrical version of Hamilton (which is a filmed performance from the original cast) more than a year away, it’s a good-sized morsel to hold us over.