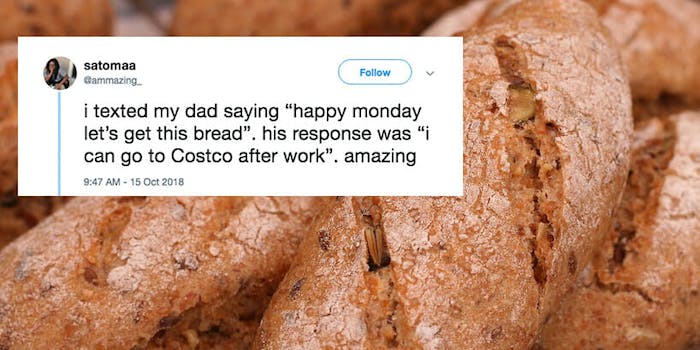 Forget money. Let's get this bread.

No matter your profession, you can probably relate to the hustle. Or the grind. Or any other expression used to refer to the stress and monotony of earning a living. A trending Twitter meme riffs on another way to talk about making money: “Let’s get this bread.”

Bread is sometimes referred to as dough (or money), which might be why we associate the two things together. According to Know Your Meme, people often use the phrase “ironically” to make fun of the desire to earn lots of money.

rise n grind lets get this bread i guess pic.twitter.com/ubh4lKnSHf

Despite a recent proliferation of the phrase on Twitter, “let’s get this bread” has existed as a meme for a while and was probably used as a real-life expression even before that.

According to Know Your Meme, the earliest known iteration of the phrase was in Rich Boy’s song “Let’s Get This Paper,” released on March 13, 2007. The first verse of the song has Rich Boy rapping, “R.I.P. Pooh Bear, that’s my dead homie/Fuck that other shit, hey, let’s get this bread homie.”

The phrase was recalled on Jan. 2, 2017, when Twitter user @carlyxnicole posted a picture of DJ Khaled photoshopped onto the Batpod with the caption “good morning let’s get this bread.”

More than a year later, Twitter user @BeastCaucasian posted a photo of a man with a Chuck E. Cheese costume and the caption, “Wake up hustlers, let’s get this bread. No days off.” According to Know Your Meme, the same image later went viral on Facebook.

There’s also this video of a man just eating two slices of bread posted by Twitter user @avalanchetwitch in May 2017 with the caption, “WAKE. UP. HUSTLERS… let’s get this bread.”

The phrase was revived on Twitter this month with all kinds of bread jokes.

my appetite: LMAO anyways.. let’s get this bread.

Me going to bed every night knowing I did the bare minimum, did not secure even the slightest bag, and neglected to get even a tiny end-piece of this bread. pic.twitter.com/eKJOXX6Cx4

Of course, most parents don’t get memes—but they can still become memes themselves. So when Twitter user @ammazing_ sent her dad a text saying, “happy monday let’s get this bread,” her dad responded, “i can go to Costco after work.” Her post has received over 65,000 retweets and 391,000 likes.

i texted my dad saying “happy monday let’s get this bread”. his response was “i can go to Costco after work”. amazing

The dad clearly didn’t understand what the phrase meant, but he’s not alone. People started posting pictures of what their parents said to “let’s get this bread,” with some hilarious responses.

my mom thinks i’m trying to send her a picture ?? pic.twitter.com/8zjp9gfNA8

A day after her viral post, Twitter user @ammazing_ posted a video of her dad with the caption, “my wholesome father. we need to protect him at all costs.”

Reminds me of my dad. I bet your father is proud of his family!

Whether they’re serious hustlers or serious about making jokes, it’s clear the people of the internet are all about that bread.

LETS GET THIS BREAD pic.twitter.com/BU9Y68JcOa