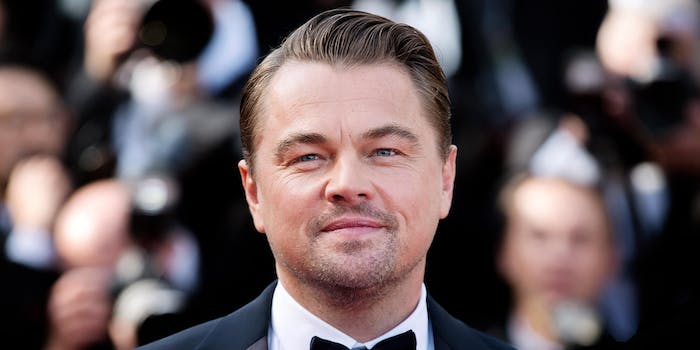 The Leonardo DiCaprio headphone sex rumors are apparently back

Gossip forums are alive with rumors of Leo vaping while using noise-canceling headphones.

Leonardo DiCaprio is a very popular man. He has starred in one of the highest-grossing movies of all time, dated an endless stream of beautiful women half his age, become the subject of a great new meme, and won an Academy Award for sleeping in animal carcasses and eating raw meat. It’s great to be Leo!

But with such tremendous fame comes intense scrutiny—and some bizarre rumors that just won’t quit. Case in point: Writer (and former Daily Dot contributor) Claire Downs reports in her latest newsletter that the Leonardo DiCaprio headphone sex rumor has once again reared its ugly head on gossip forums. Apparently, another woman has claimed that she experienced the arguably odd sex techniques.

In case you missed it the first (and second, and third, and fourth) time around, here’s how Jezebel summarized the rumor, as first written by OK!, in 2016:

The item (titled “LEO HOLLYWOOD’S LAZIEST LOVER!”) tell the story of one of Leo’s “recent conquests” being invited to his home “for a romp,” as recounted by a friend she “tattled” to. The friend claims that while Leo and the woman were engaging in sexual intercourse, Leo “reached for his vaporizer and a pair of noise-canceling headphones, laid back and closed his eyes and signaled for her to keep going.” This was the same unverified story I’d heard so many months ago, but with additional details like simultaneous vaping and the fact that the headphones were “noise-canceling.”

The details were astounding in both their specificity and absurdity. Is sex really so boring for Leo that he has to vape and listen to music while doing it? Moreover, the report alleged that he was listening to MGMT, a band that hasn’t been a dominant cultural force since roughly 2008. It’s all weird.

It was the quintessential gossip item, and pretty soon, lots of people were trying to get down the Leo way. Maxim reported last year that many Apple AirPod owners love to wear them during sex. The publication cited a study from ticket resale marketplace TickPick (no, really), which revealed that 17% of the 1,010 people interviewed opted to take their earbuds to the bedroom with them. (This sounds like an excellent way to lose AirPods. You people better be careful!)

Anyway: All that is to say, the Leo headphone sex rumors are apparently back. DiCaprio’s publicity team did not immediately respond to the Daily Dot’s request for confirmation of the rumors, and it seems unlikely they ever will. Honestly, that’s probably for the best.