Seventeen-year-old Leelah Alcorn wrote a bitter farewell to her conservative parents. Then she walked into traffic.

Leelah Alcorn’s three-year struggle to assert her transgender identity in a staunchly Christian household came to an end Sunday, when she was struck and killed by oncoming traffic on I-71 near Cincinnati.

Before she died, the 17-year-old left a heartbreaking note on Tumblr detailing the depression and increasing hopelessness she had experienced since attempting to come out to her parents after first learning the word “transgender” at the age of 14. Though she wrote that she initially “cried of happiness” when learning there was a name for the gender dysphoria she had felt her whole life, her joy was short-lived:

I immediately told my mom, and she reacted extremely negatively, telling me that it was a phase, that I would never truly be a girl, that God doesn’t make mistakes, that I am wrong. If you are reading this, parents, please don’t tell this to your kids. Even if you are Christian or are against transgender people don’t ever say that to someone, especially your kid. That won’t do anything but make them hate them self. That’s exactly what it did to me.

After three years of dealing with the toll her parents’ reaction took, Alcorn wrote that “The life I would’ve lived isn’t worth living in… because I’m transgender.”

Shortly after leaving this note on her Tumblr, along with a final series of goodbyes to friends and family, Alcorn reportedly walked into traffic on the interstate early Sunday morning. She was struck and killed by an oncoming semi-trailer.

Despite Alcorn’s stated reason for her tragic decision, her parents prepared an obituary that described her as a “loving son.” Though a photo that misrepresents her as a boy has since been removed from the website of the last public school she attended, screencaptures of it are circulating the Internet.

denying your child's gender identity is one thing, but pretending their suicide is an accident on top of that? i feel ill #LeelahAlcorn

While supporters on Tumblr and Twitter urged tolerance and expressed outrage at the actions of Alcorn’s parents, it’s Leelah herself who might have had the last word—in an image she posted to Tumblr shortly before her death: 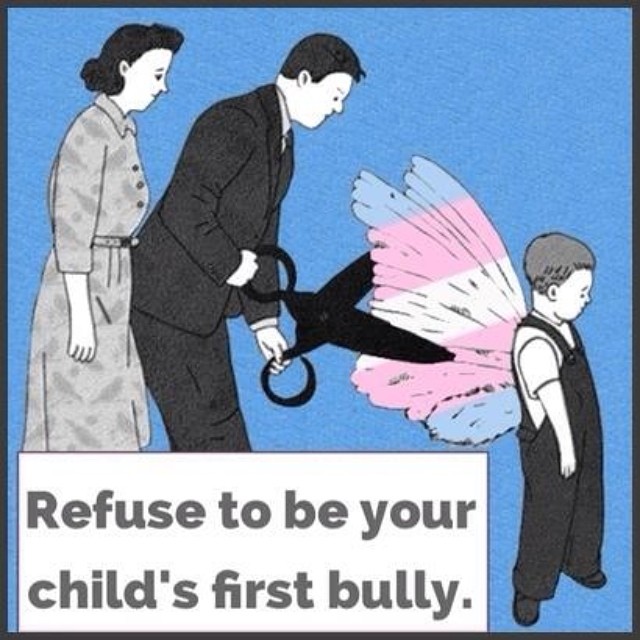 The image depicts the trans flag in the form of fairy wings, and a clueless set of parents trying to shear them off.

At press time, Tumblr users were reblogging it with a note simply reading:

Editor’s note: This story has been updated to remove portions of the Alcorn’s final note that were not essential to the story.