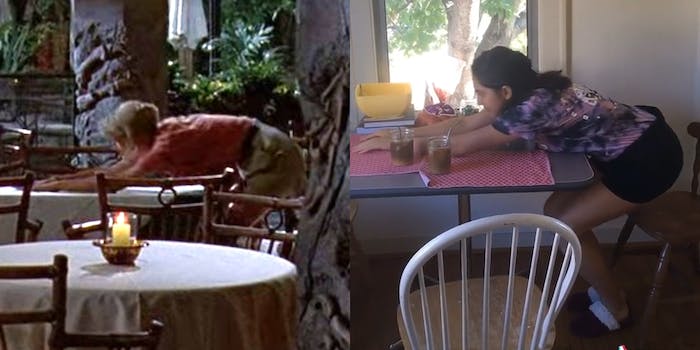 'It is absolutely the gayest way I've ever seen someone sit in my entire life.'

Laura Dern is iconic. And so are her sitting choices. The hey-girl leg-tuck from Marriage Story; her casual courtside vibe. Now her hands-first sit-down in Jurassic Park has been turned into a TikTok challenge.

Jake Maia Arlow, the creator, tells the Daily Dot she’s a “longtime Jurassic Park fan, but my girlfriend had never seen it so we watched it together.” When it came to the part where Dern’s Ellie Sattler chooses to first stretch her arms out in front of her before sitting down at a table, her girlfriend “simply screamed.”

“It is absolutely the gayest way I’ve ever seen someone sit in my entire life and so deeply powerful,” Arlow says.

Dern’s appeared in her daughter’s TikToks: It’s possible she’s still lurking on the app, and will make the circle complete.