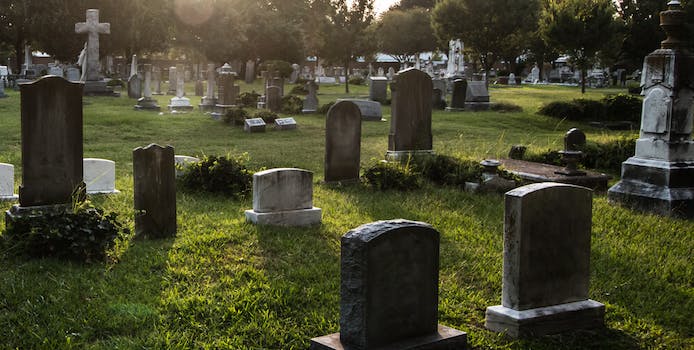 Laughter at a funeral is more common than you think.

We’ve all had those moments in inappropriate situations where something just hits you as funny and you can’t stop laughing. Of all the places where it can happen, a funeral is probably the worst, but thanks to a Twitter thread started by comedian Andy Richter, we can see that it apparently happens there a lot.

Was just reminded of something. You ever been part of a poorly-stifled group giggle for at a funeral? That happened when we noticed the family plot next to where we were burying my grandma, which was a combo of two families. The big headstone said Goode-Eaton.

“Was just reminded of something,” he wrote on Sunday. “You ever been part of a poorly-stifled group giggle for at a funeral? That happened when we noticed the family plot next to where we were burying my grandma, which was a combo of two families. The big headstone said Goode-Eaton.”

Funeral comedy seems to come in several different categories. We have the unintentionally funny, where something about the setting or the other mourners set people off.

When I was in the 7th grade, a bunch of us went to the funeral for a teacher's husband. He had been a party clown, so some asshole decided to come to the funeral in full clown makeup. The sight of a clown in the communion line was more than my friends and I could handle.

My uncle died. My dad has somewhat bushy eyebrows so was using funeral home tissues that were cheap &kept shredding into his brows like huge dandruff. Sister & I lost it. No one noticed thankfully. Funeral homes: up the tissue game

Was at memorial where there was a chicken coop outside. The doors opened and two bagpipers played amazing grace. As soon as the last note was done hanging in the air, the rooster took over with its own rendition. The widow was mortified so people tried to stifle the lol.

And the mourner who thinks they’re hilarious (and to be fair, some of them clearly are).

When we were like 12 my cousin whispered “I see dead people” to me as they were lowering the casket at my great grandmas very somber funeral at Arlington Cemetery. We both lost it and let me tell you people were not amused at the giggling preteens. But funerals are so weird!!!

Russian Orthodox funerals are epic & go on forever! At hour two of my grandfather’s I whispered to my siblings, “Haven’t they gotten him into heaven YET?” My mom heard me & we all got terrible giggles

At his mother burial, as he and his brothers were lowering her casket into the ground, husband said "Let's let mom down one more time." All wound up giggling so hard they almost dropped her..

Even when it’s not on purpose and actually quite sweet.

…This sweet weirdo pulled out a PLASTIC MEASURING CUP & said, sheepishly, “I just thought, so it would be even?” She was sitting there holding that thing like she was about to bake a damn cake with his ashes, and I lost. my. mind. I laughed so hard I cried & fell off the couch.

Sometimes it’s the deceased who is the comedian, in which case laughter is probably appropriate.

My mother had an "I'd Rather Be Breathing" bumper sticker custom made for her coffin before she died. As they were wheeling her up to the alter I had to explain to everyone at the funeral that it was NOT my idea.

A woman I regarded as an adoptive grandmother had talked for years about how she looked forward to her heavenly reunion with her husband. She was buried in lingerie (she was 84) and wanted a bumper sticker for her casket. It said, “if this thing’s rocking, don’t come knocking.”

Or the sad yet adorable confusion of little kids who don’t quite grasp the concept of death yet.

Priest was doing the old ‘Mary isn’t really dead,she’s with us all’, 3 year old niece screams out,”she’s not dead?!!”

My nephew, talking to my cousin after my grandmother’s funeral:
“So Ma is in heaven now?”
“Yes, honey”
“With Jesus?”
“Yes, honey. With Jesus”
Nephew looks confusedly down the street, where the hearse just drove away.
“So… was Jesus driving that car?”

During my grandpa’s eulogy my toddler cousins got into a very loud argument about whether he had died or gone to heaven. Their parents had to take them out of the church and everyone was losing it trying not to laugh.

Then there are the funerals where no one really misses the departed. Convention requires the priest to say nice things about the deceased, and sometimes those things are so far from the truth people start wondering if they’re even at the right funeral.

Plus this was another case of the preacher, who obviously never met him, sang his praises so highly my mom, sitting next to me and who never had a bad word to say about anyone, leaned toward me and said – are we sure that’s him in the casket?

My uncle had finally had enough of his mother’s made-up eulogy & stage-whispered to my cousin, “I don’t know who this preacher’s talkin’ ‘bout, my mama was meaner than a snake!” Giggling & snickering ensued

Sometimes even the priest can’t find anything nice to say, which is hilarious in its own right.

My grandmother was not a nice woman and at her funeral, the priest said how fair it was for her to be in purgatory. There was an audible gasp and then my mom started silently cry-laughing. It seemed this legitimized my mom renting a convertible for the occasion and wearing red.

My dad’s cousin (whom I’d never heard of prior to his death) died on 9/11. At the funeral, the family members who were supposed to give the eulogies all backed out. My grandfather—not at all quietly—says, “welp, he always was an asshole,” and the whole funeral home cracks up.

I'm also grateful for my family's parish priest, who knows us well enough to have two homilies prepared. One, for the beloved deceased, focuses heavily on their lives and how much they meant to us. The other, for the less-beloved, focuses on God's boundless mercy and forgiveness.

Honestly, funerals are tough, and anything that breaks the tension is likely to seem much funnier than it normally would. So, while it seems disrespectful, try to cut laughing mourners some slack.