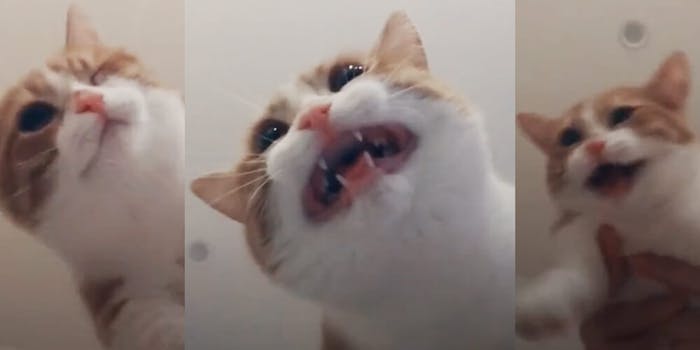 This ‘Mr. Sandman’ challenge fail is almost as good as the original TikTok

No cats were harmed in the making of this video.

Last week, the internet was captivated by a TikTok video in which a teen filmed her orange tabby cat dancing and soaring to the 1954 Chordettes song “Mr. Sandman,” using the platform’s nine-camera split filter. It didn’t take long before others copied the stunt—and folks, we now have our first big Mr. Sandman challenge fail.

Over the weekend, popular Twitch streamer iGumdrop (a.k.a. Jamie) uploaded her own attempt of the stunt to TikTok featuring her miniature orange and white cat named Ebi (which translates to “shrimp” in Japanese).

“I tried the tik tok with my cat and she’s not having it,” she wrote, sharing the video on Twitter as well—where it was soon viewed over 4.5 million times.

i tried the tik tok with my cat and she’s not having it pic.twitter.com/LTTZrdxDtY

Indeed, the tiny cat was decidedly not amused with being zoomed around in the air, voicing her abject protest in dejected meows over the course of the 13-second-long clip. Unfortunately for Ebi , however, her protests also happen to be hilarious and adorable, which only served to aid the clip in going viral.

And many on Twitter couldn’t get enough of poor, sad Ebi’s misery, capturing the moment in GIFs and still screenshots mined from the so-called “Mr. Sandman” challenge fail.

“mom please put me down i don’t like this” – cat

THE LAST FRAME IS MY FAV pic.twitter.com/sihe5q6YuX

Although some were quick to jump into the fray of Jamie’s @ mentions with cries of animal abuse, the cat is clearly just fine. Let’s not forget that house cats are barely domesticated mini-predators that would turn on their human overlords in a heartbeat if they were big enough.

So the only injury Ebi likely sustained in the making of the Mr. Sandman challenge fail was that of her pride, as you can see from photos in a follow-up tweet, that demonstrate she is very much a beloved and ostensibly well cared for pet.

And as for her brand new Instagram account, with only three posts so far, Ebi already has over 5,000 followers. Welcome to internet fame, Ebi!