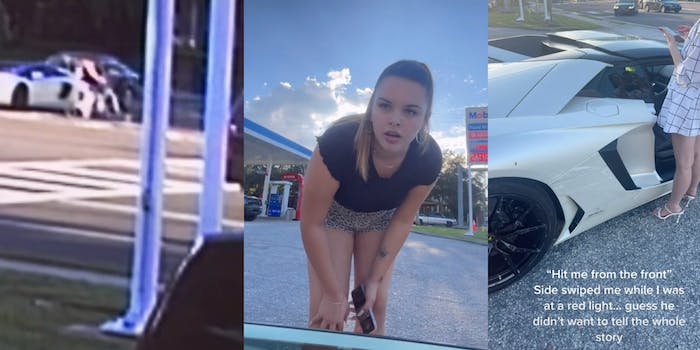 ‘Get your justice girl’: New TikTok may clear woman who rear-ended Lamborghini in viral video and then blamed driver

'Guess he didn't want to tell the whole story.'

Over the weekend, a woman went viral for rear-ending a man’s Lamborghini and claiming he was at fault.

The woman quickly became a target of ridicule as the video shot to virality, climbing to the top of Reddit’s PublicFreakout sub. People blasted her for attempting to flip the blame on the other driver, despite being shown in surveillance footage rear-ending his vehicle with her Audi sedan. But that was all before new footage emerged, complicating the story and partially exonerating the woman.

A clip shared to the same subreddit provides an earlier view of the two driver’s interactions. In less than 24 hours on the platform, the video has earned nearly 50,000 upvotes and dozens of comments. The video combines two TikToks from user @maddygilsoul1, who appears to be the woman featured in the original clip.

The first clip begins as the person filming is checking out at a gas station. A voiceover identifies the Lambo driver as Matt Heller, before claiming that he “went into oncoming traffic on a red light because I didn’t turn left on yellow.” The Lamborghini owner does appear to be Heller. The videos that initially went viral are posted to his TikTok account and Instagram. Maddy also claims that Heller “almost hit a person” and that her “lawyers will be serving him with slander.”

The video then shifts to show a different snippet of surveillance footage. It starts with a reversal of the shot, which sees the pristine white Lamborghini sliding backward past the black Audi and a cyclist. When the footage proceeds normally, the shot clearly shows as the Lamborghini squeezes past the Audi, side-swiping it in the process. It also comes within inches of striking the passing cyclist. The clip then shifts to show the second, and only other, upload posted to @maddygilsoul1’s account.

This video is far shorter. It simply shows an image of the Lamborghini following the dual accidents, with distinct scrapes down one of its sides. A text overlay clarifies that when Maddy claimed Heller “hit me from the front” she meant that he “side-swiped me while I was at a red light.” It also points out that “he didn’t want to tell the whole story.”

As noted by numerous commenters, the new video doesn’t entirely absolve Maddy of blame. While it does appear that the Lamborghini driver side-swiped her vehicle before the initial viral video began, she still rear-ended him. Many viewers pointed out that this seems to be a classic “two wrongs don’t make a right” situation. A discussion about intent soon followed, with people noting that Maddy could be considered in the right if the rear-ending was unintentional.

Several people claimed that Heller “brake checked” her, causing the second portion of the accident, but video footage doesn’t really support this. A video of both incidents, spliced together and provided by Reddit user gypster85, does show Maddy immediately following Heller after he apparently side-swiped her, but he is at a full stop before her car strikes his. This indicates that she likely had the time to stop before their cars connected, but chose not to. A consistent argument made by viewers claims that Maddy’s “fight or flight” kicked in following the initial side swipe, leading her to lose “awareness of her surroundings,” fail to brake in time, and “rear-end Matt.”

Despite Maddy still appearing to be at least somewhat in the wrong, many people flocked to support her following the emergence of her videos. Numerous viewers apologized for passing judgment without understanding the entire story, and encouraged her to “get your justice girl.”

Viewers remain entirely split on who bears the majority of the blame. A number of people felt that the rear-ending was justified, given that Heller attempted to flee the scene of the initial accident, but plenty of others disagreed. They claimed that Maddy threw any superiority she might have claimed out the window when she seemingly purposefully struck his car.

Update 10:32pm CT, Nov. 23: A representative for Matt Heller identified him as the owner and founder of HornBlasters, a company that sells air horn attachments for cars. The representative also shared with the Daily Dot a doorbell camera video that allegedly shows the incident between Heller and Maddy, the Audi driver.

The video shows a line of cars stopped at a traffic light. The black Audi sedan is second in line, and the white Lamborghini is third. As a car horn goes off, the blue car at the front of the line pulls forward. The Audi is still as the Lamborgini pulls around it. As the Lamborghini passes, the Audi also begins to pull forward, and the two cars appear to collide.

The representative for Heller said he drove around the Audi driver “for sitting at a green light” and asserted that the bicyclist seen in other videos “was a car length ahead of [the drivers] and well clear.”