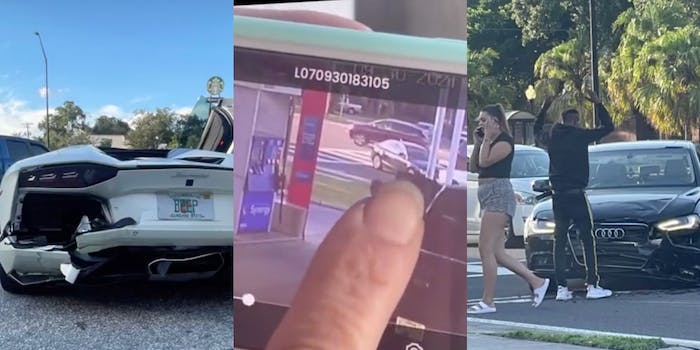 ‘That’s not how this works’: Woman rear ends Lamborghini, tries to blame its driver for hitting her in viral video

'You did that to the front of my f*cking car,' she said after hitting the Lamborghini.

Update 12:18pm CT, Oct. 6: New TikTok videos may clear the woman who rear-ended the Lamborghini in a viral video and then blamed driver. Our original report is below.

A viral Reddit video shows a woman attempt to blame another driver in a Lamborghini after she rear-ends him.

The video was posted by u/esberat to the popular r/PublicFreakout; the footage shows a damaged rear on a Lamborghini sitting in a south Florida gas station. After a cut, a woman, likely an employee inside the nearby gas station, uses her phone to access the security system.

She shows the driver the footage that captures an Audi sedan rear-ending his Lamborghini.

“You have where she (hit the car)?” he asks. She runs it back for the man, for confirmation.

Somehow, though, the woman comes walking fast toward his vehicle, which he’s already driven out of traffic.

The woman knocks on the window, claiming, “You did that to the front of my fucking car.”

After he starts laughing, because he’s seen the evidence, she asks him, “What’s funny? That’s my new fucking car!”

“Well, when you rear-end people, that’s not how this works,” he responds. “It’s okay; I’ll call the cops real quick. You’re saying that I hit you from behind.”

“No, you hit me in the front of it. Remember, I was at the red light, and you went in front of me and hit my car,” she says, which is not true according to the security footage.

The driver laughs it off, but she’s not amused. The next jump shows the woman suddenly upset, being held back by who appears to be her boyfriend, around the Lamborghini: “I’m bout to beat the fuck outta this bitch!”

The Lamborghini driver yells out, “Worldstar!” but the woman throws no hands. The next jump shows her on the phone with the boyfriend throwing his hands up in reaction to her damaged car.

The best comment came from u/RoutSpout, regarding the ridiculous increase she should expect: “Insurance: ‘I’m about to raise the premiums outta dis bitch!'”

The Daily Dot reached out to the alleged Lamborghini driver for comment.