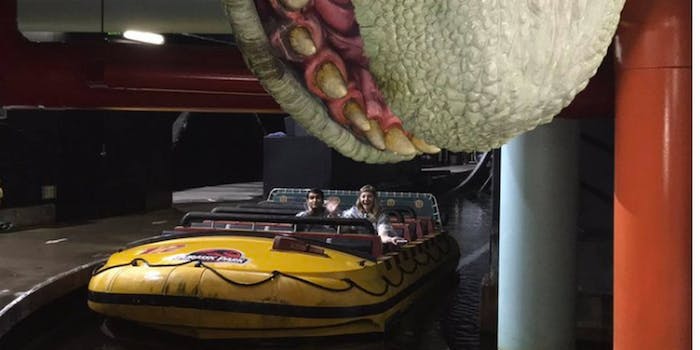 Hold onto your butts!

In what sounds like the plot of the world’s worst sequel, actor Kumail Nanjiani got stuck for hours Thursday night on Jurassic Park: The Ride, and he livetweeted the whole ordeal.

It’s unclear what exactly went wrong with the Universal Studios attraction, but several cars on the ride stalled out around 10:30pm on Thursday. The Silicon Valley star was stuck with nowhere to go, along with his wife and The Meltdown with Jonah and Kumail producer Emily V. Gordon and television writer Matt Mira, among others. Together, they tracked the ordeal, dubbed #JurassicParked.

Have you ever wanted to be stuck halfway up a steep hill on the Jurassic Park ride at Universal? Because that's where I am right now!

I've been stuck on the Jurassic Park ride at Universal Studios on an incline for 25 minutes and I've honestly never been more afraid.

Apparently, park officials attempted to reboot the ride, but they only made matters worse.

"We had another issue come up so we are resetting the ride once again." I WANT MY MOMMY

Some park rangers eventually stepped in, but everyone really wanted to know: Where’s Chris Pratt when you need him?

Ultimately, prayers were answered, and our unlikely heroes were led to safety.

We've been evacuated off the boat & back into the park. Still praying for @emilyvgordon & @kumail, who were on their own boat, 2 behind.

Let this be a courtesy reminder: Always hold on to your butts.