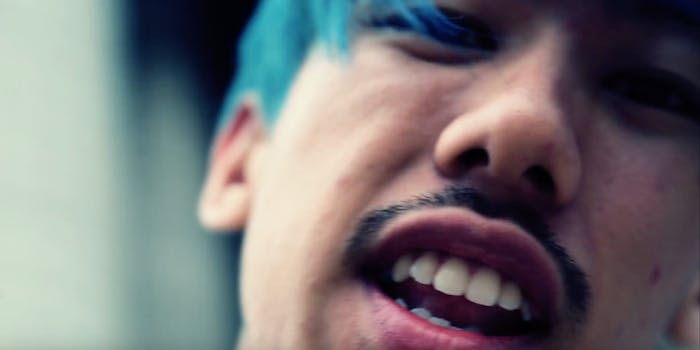 A Japanese rapper is being savagely mocked online for his performance in a leaked sex tape.

Japanese underground star Kohh is perhaps best known in the U.S. for his collaboration with Frank Ocean. He was exposed online this week when, in an apparent accident, model Ayana Miyamoto posted a cellphone video of what appeared to be the two of them having sex. She quickly removed the video from her social media accounts, but the damage was already done. Fans and haters alike have seen Kohh’s oral technique, and the reviews are… not good.

“The perv in me wants to watch how my future baby daddy lays the pipe, but the christian in me wants to respect their privacy,” one Kohh follower wrote on the allkpop forums. That was soon followed by, “UPDATE: I saw it, and I’ve decided to part ways with Kohh. Effective immediately.”

The harshest critics are K-pop fans, who know about Kohh through his friendships with various Korean rappers. They’re convinced that their beautiful Korean faves are much more adept at oral sex than Kohh, Just look at Seo Kang Joon going to town on a watermelon on the show Law of the Jungle:

Kohh hasn’t exactly had an easy go of it in life. According to a 2017 Dazed profile, “Kohh endured a brutal upbringing – a father who committed suicide, a mother addicted to meth, his home in an area blighted by violence and drugs.”

Getting dragged online for a sloppy sexual performance is hardly the worst thing that’s ever happened to him, but that doesn’t make it cool.

On the bright side, Aramajapan writes that this might not be all bad for Kohh’s reputation. In fact, they’re choosing to view it as performance art.

“KOHH, with this release, has raised the bar for all his contemporaries, and has become the Kanye West of Japan,” the site said in its review.