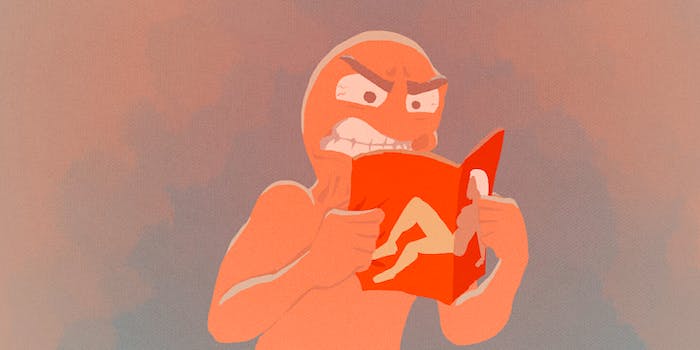 For starters, there is no federal law against it.

Between 2013 and 2014, hackers were able to gain access to celebrity iCloud accounts by taking advantage of a security issue regarding iCloud passwords. Photos and videos of more than 100 people—including Jennifer Lawrence, Kate Upton, and Kaley Cuoco—were dumped in the leak. An investigation revealed that several celebrities had their iCloud information phished from misleading emails that appeared to be from Apple and Google.

For “Beaver Hunt,” the magazine published reader-submitted images of naked women who were often identified by their hobbies, sexual fantasies, and sometimes their names. Photos were submitted along with “consent forms” from the women themselves.

However, one couple in Texas sued the magazine for defamation and invasion of privacy in 1984 for publishing the wife’s photo. The couple had alleged the entry, which included the wife’s identifying information, had been submitted by neighbors who had stolen the photos from their home, and that Hustler didn’t properly vet the photos before printing them.

4) Long before “Beaver Hunt,” women like Marilyn Monroe were featured in Playboy and Penthouse without consent

For the first issue of Playboy, published in 1953, Hugh Hefner had purchased calendar pinup photos of Marilyn Monroe, who was then at the height of her career. He then printed one of them in the issue’s centerfold without her consent, according to 1967 TIME story about the magazine.

In 1983, Vanessa Williams became the first black woman crowned Miss America. However, she was forced to give up the title the following year after photos from a nude shoot done in 1982 were published in Penthouse without her consent. In 2015, more than three decades later, the CEO of the Miss America Organization apologized to Williams for, “anything that was said or done that made you feel any less than the Miss America you are and the Miss America you always will be.”

Just this March, Wheel of Fortune personality Vanna White revealed that her May 1987 Playboy cover was actually taken during a separate photo shoot she did while struggling as a model in Los Angeles. Once she became a co-host on the show, White said Hefner obtained the photos and ran them without her consent.

Other famous women whose photos were run by Playboy, Hustler, and similar magazines without consent include Charlize Theron, Uma Thurman, Madonna, and First Lady Jacqueline Kennedy Onassis, according to Complex.

7) Craig Brittain founded Is Anybody Down?, a site based on Is Anyone Up

According to Salter, Is Anybody Down? employed a “content acquisition specialist” who would talk to women on online dating sites and solicit nude images. Brittain himself was accused of posing as a woman online to solicit nude photos. He’s also been accused of posing as fictitious New York lawyer David Blade III, who said he’d have photos removed from Is Anybody Down? for $200 to $300.

Brittain’s old LiveJournal blog was leaked, revealing his misfortunes in dating and his view of “girls” as “evil.” Meanwhile, Moore had the entirety of his personal information doxxed, including logins, passwords, and credit card information, in an Anonymous attack called “Hunt Hunter.”

“We will protect anyone who is victimized by abuse of our internet, we will prevent the stalking, rape, and possible murders as by-product of his sites,” Anonymous said in a press release regarding their doxing of Moore.

9) Moore ended up selling IsAnyoneUp.com to anti-bullying site BullyVille in 2012

In 2010, 17-year-old Kim Duthie posted nude photos of two Australian Football League (AFL) stars after an exclusive relationship with one of them ended. After obtaining nude photos of several AFL players from the computer of the player she was dating, the teen posted several of the photos as part of the “DickiLeaks” series to Facebook and lied that she was pregnant. (Duthie then went on to say her AFL ex-boyfriend’s agent provided her drugs and had sex with her, which she also later admitted to lying about.)

Zimmerman, who was acquitted in the 2012 murder of Trayvon Martin, was booted from Twitter after posting two topless photos of his ex-girlfriend in 2015, including her name, phone number, and email address. He accused Heather, the ex, of cheating on him “with a dirty Muslim” and of stealing money and a gun.

In an exclusive interview with the Daily Dot, Heather said she had attempted to break up with Zimmerman several times and had filed a restraining order against him.

“I’ve never dreamed that anything like this would ever happen to me,” Heather said. “I’m from a very small town. I’ve never been in the public eye by any means.”

While it’s not a prenuptial agreement itself, the social media “prenup” is a clause that could, for example, forbid a spouse from sharing photos online that could harm the other’s professional reputation, nude photos or otherwise.

The penalty for violating your spouse and the clause? Well, for someone who makes below $5 million, it’d be $50,000 per offending post.

“We want to be able to contractually limit the damage,” Ann-Margaret Carrozza, a New York attorney, told ABC News in 2014. “The damage is psychological, in the case of humiliating posts and tweets and pictures out there, and it’s economic because my career prospects are harmed.”

Dictionary.com’s addition was ushered in alongside “brogrammer,” “microaggression,” “smartwatch,” and “dox,” which also typically happens to victims of nonconsensual pornography, too, as their personal information is made public without consent.

Merriam-Webster, however, didn’t include the term in its book until 2016, alongside terms “Bitcoin,” “FOMO,” and “trigger warning.”

Documents seen by the Guardian showed Facebook also detected 2,450 cases of “sextortion,” attempts to extort money, or more nude photos, from someone. As a result, more than 14,000 accounts were disabled. 33 of the cases reviewed involved children, and 16 were escalated to Facebook’s internal investigations team.

According to the Cyber Civil Right Initiative, Illinois’ law doesn’t stipulate that an offender’s intent is necessary when ruling on a victim’s emotional distress. The law also applies to photos that victims take themselves and to sexual photos that may not necessarily feature “sexual parts.”

19) Experts warn that VR pornography will only escalate violence

20) Not sure what your state’s laws are on pornography?