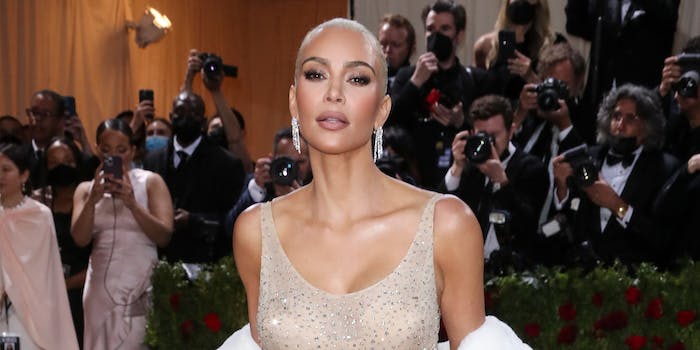 'What did they expect fr.'

This comes after an all-consuming Internet debate over the ethics of Kardashian wearing the famous Jean Louis dress in which she sang “Happy Birthday” to President John F. Kennedy in 1962. The crystal-covered clothing item was acquired by Ripley’s Believe It or Not! in 2016, who lent the garment to Kardashian for the yearly event.

Kardashian also faced significant outrage over her decision to lose weight in order to wear the dress. She told Vogue she lost 16 pounds in order to fit into it.

However, when the reality TV star took the dress to the Met Gala red carpet, the extensive care exhibited to ensure the safety of the dress was well documented. Kardashian only wore the real dress on the red carpet, and she changed into a replica afterward. However, it appears the cautionary measures weren’t enough.

Scott Fortner’s Marilyn Monroe Collection, the largest private collection of the late star’s items, shared an image on Instagram of the alleged damage done to the dress. The dress appears to be missing some crystals around the hip area.

“Just in case you missed it… Missing crystals, and some left hanging by a thread,” the account owner captioned the image.

The collection claims the photo of the damage was taken at Ripley’s Hollywood location on June 12, by Instagram user @1morrisette.

“@ripleysbelieveitornot , Was it worth it?” the caption continues.

A post shared by The Marilyn Monroe Collection (@marilynmonroecollection)

The before-and-after image was then shared to Twitter by Pop Crave (@popcrave), where many users were outraged. The tweet received over 16,000 quote-tweets and 125,000 likes.

“Ppl defending kim are insane. she didn’t HAVE to wear the dress especially when she clearly couldn’t fit in it even after starving herself. now she’s ruined an incredibly expensive and iconic dress all bc she wanted to show off,” one user wrote in a quote-tweet.

“I hope Marilyn Monroe haunts Kim for the rest of her life,” another said.

Others were not surprised that the dress was reportedly damaged.

“Well they put a 60+ year old dress on someone a couple modern sizes bigger than marilyn so, yeah that tracks,” one user argued.

“What did they expect fr,” another added.