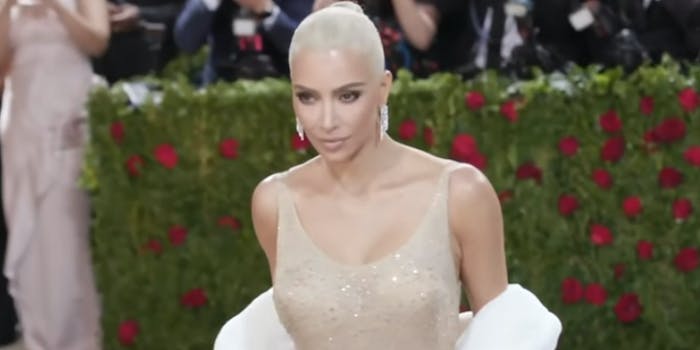 A lot happened on Monday night: Celebs in million-dollar outfits got their little pictures taken at the Met Gala, and a leaked opinion to overturn Roe v. Wade was published by Politico.

Adding to the cognitive dissonance of the night’s theme of “gilded glamour” was Kim Kardashian, who wore the same dress Marilyn Monroe wore when she sang “Happy Birthday” to John F. Kennedy in May 1962. According to Ripley’s Believe It Or Not!, which acquired the dress in 2016 and loaned it to Kardashian, no alterations are allowed to be made on Hollywood costumer Jean Louis’ gown. Monroe allegedly told Louis, “I want you to design a truly historical dress, a dazzling dress that’s one-of-a-kind, a dress that only Marilyn Monroe could wear.” She apparently had to be sewn into it.

Women’s sizes have certainly shifted since 1962, so Kardashian telling Vogue she “wanted to cry” when the dress didn’t initially fit her, and that she quickly went on a “strict” diet to lose 16 pounds in three weeks, sparked debate once again about how the Kardashian industrial complex has set impossible, damaging beauty standards.

“That woman is the MAIN enforcer of society’s beauty ideals,” said writer Meecham Whitson Meriweather (@MediumSizeMeech). “How many people went and got BBLs because of her? And the family edits their pics because THEY can’t fit the ideals they created!”

A tone-deaf tweet comparing Monroe’s legacy to Kardashian’s was also ratioed. Several tweets wondered how Kardashian made the iconic dress look like a Fashion Nova item.

As noted elsewhere, that type of drastic weight loss is very unhealthy and not advisable. But Kardashian (and her family) have been repeatedly called out for digitally altering her appearance and promoting a warped idea of body image and beauty. And you can see a chilling effect: A recent NBC report detailed how influencers, some still in their teens, are getting cosmetic procedures like lip fillers in exchange for posts on TikTok and Instagram.