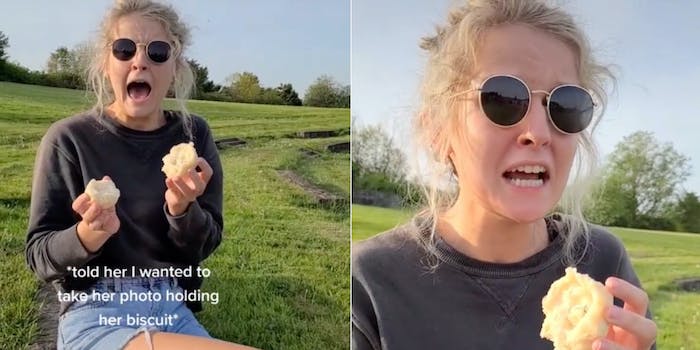 ‘Are you kidding me?’: Man proposes with biscuit in viral TikTok video

'Every kiss begins with KFC.'

Proposals, like gender announcements, have become increasingly elaborate in the age of social media. Despite the steep competition, one man managed an entirely unique proposal with nothing but a bag of KFC.

The short video sees the original poster’s soon-to-be bride sitting outside near several boxes of KFC. Text over the video notes that the groom told her he “wanted to take her photo holding a biscuit.” She momentarily rifles through one of the boxes before producing a biscuit, which she promptly rips in half.

When she sees what’s inside, the bride-to-be gasps, then screams, staring over at the camera. “Are you kidding me,” she asks. “What is this?”

Keeping the camera firmly aimed at his future wife, the groom-to-be leans forward and asks for her hand. She is clearly still in shock, repeatedly asking “Are you kidding me?” as her groom laughs and the video concludes. Thankfully, viewers got a resolution via a second video.

A follow-up video compiles several photos taken the day of the proposal. The soon-to-be bride sits, aiming a charming smile at the camera with the KFC arranged tidily next to her, before the picture shifts to show her left hand—holding chicken, because of course she is—with her beautiful new ring in place. It then shifts to several final pictures of the happy couple cuddling over their proposal dinner. The groom notes in the video caption that “I never thought that I would be proposing to the girl of my dreams with a KFC biscuit.”

People in the comments lauded the couple for their unique, and delicious, proposal. It even inspired a few future copycats, as commenters noted their desires for a carb-loaded proposal.

“If my future husband doesn’t propose to me with a biscuit or some other delicious carb, I don’t want it,” one commenter wrote.

“If this isn’t how I’m proposed to then I don’t want to get married,” another viewer agreed.

Past the consistent argument about how to classify the flaky baked treat housing the ring—non-Americans insist it’s a scone, not a biscuit—the majority of viewers spent their time in the comment section slinging jokes and congratulating the happy couple. Many also urged KFC to send some love the couple’s way.

“If you don’t cater their wedding the internet will never forgive you,” one user challenged the fast-food giant.

“If KFC doesn’t give you free food for life or host the food at your wedding ima be mad,” another wrote. Several commenters even urged KFC to purchase the video for use as a commercial.

KFC responded to the video in a statement to Nexstar: “We’re always honored to be a part of special moments, celebrations, traditions and memories of our customers,” the company said. “We’ve been in touch with the happy couple to extend our congratulations on their engagement!”

But not all people are looking for a KFC-specific proposal. One user suggested a similar idea, but “with the ring inside a Crunchwrap Supreme” from Taco Bell.

We may have a trend of fast food proposals headed our way.