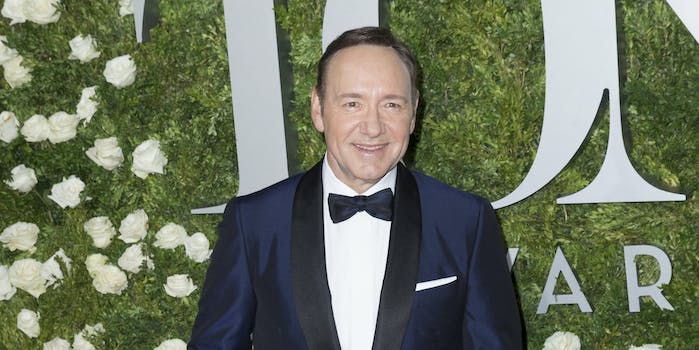 He plays a detective in a movie about a man falsely accused.

Kevin Spacey hasn’t been cast in a project since more than a dozen men accused him of sexual misconduct starting in 2017, but he’s now getting his first acting role in years.

ABC News reported over the weekend that Spacey has been cast in L’uomo Che Disegnò Dio (which is also known as The Man Who Drew God), an Italian film from director Franco Nero.

L’uomo Che Disegnò Dio will star Nero as a blind artist with the ability to draw people’s portraits by simply listening to their voice. The Telegraph has more details about the plot, which will involve Nero’s character being falsely accused of sexual abuse. According to FilmItalia, which is a database of contemporary Italian films, the film is a “fable on the need to rediscover the miraculous power of dignity in a world where media’s noise has solved the problem of man’s imperfection simply by removing the problem itself.”

Louis Nero, a producer on the film and Nero’s brother, confirmed to Variety that Spacey’s role in the film is something akin to a cameo and that he will be playing a police detective. Vanessa Redgrave, director Nero’s wife, will also appear in the film as the but only if she’s able to travel to Italy. Nero also confirmed the casting.

“I’m very happy Kevin agreed to participate in my film,” Nero told ABC News. “I consider him a great actor and I can’t wait to start the movie.”

Little else is known about the film, and it’s unclear when it will be released. But as news of Spacey’s casting spread, the outrage over Spacey getting an acting job quickly spread.

Starting in late 2017, more than a dozen people came forward and said that Spacey harassed, groped, or assaulted them. Some of the victims worked on House of Cards, the Netflix series Spacey starred in before the allegations led to his firing while other instances occurred during Spacey’s tenure as artistic director at the Old Vic. While some of the men who came forward, such as actors Anthony Rapp (who said that Spacey made sexual advances when Rapp was 14) and Harry Dreyfuss (who said that Spacey groped him when Dreyfuss was 18), chose to do so publicly, others stayed anonymous.

Spacey was charged in Massachusetts with indecent assault and battery in 2018, but the charges were dropped less than a year later. Prosecutors in Los Angeles declined to charge Spacey in two cases of sexual assault while earlier this month, a federal judge ruled that the plaintiff suing Spacey in a sexual assault case in New York has to reveal himself to move the lawsuit forward.

And Spacey’s career has been affected as well. He hasn’t been cast in anything since 2017—with Ridley Scott going as far as to recast Spacey’s role in All the Money in the World weeks before its release—and his most recent film, Billionaire Boys Club, was essentially dead on arrival when it was released in 2018.

Many people are already pointing to Spacey as an indication that powerful celebrities accused of sexual misconduct never suffer professional repercussions for long, but there’s also an argument to be made that a small role in a small Italian movie, while something that will spark plenty of rage, might not quite the career comeback it’s being framed to be.

“I wish that when we get news of sexual abusers getting cast in films that most likely will go nowhere we’d just ignore it instead of creating discourse and thus bringing more attention to them,” @haaniyah_ tweeted.