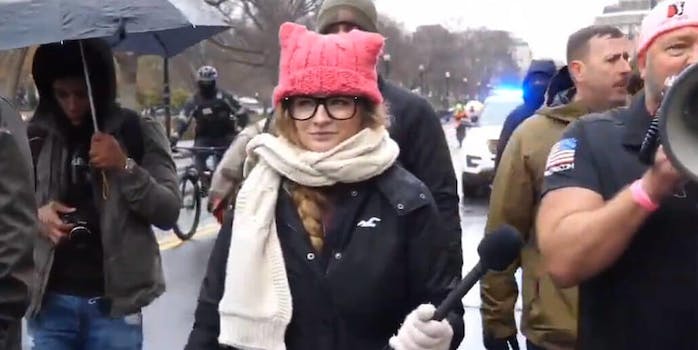 Bennett streamed into the collective consciousness in 2018 with photos and video of her carrying an AR-15 and graduation cap emblazoned with the words, “Come and take it.”

Since then, she’s made a name for herself by showing up to liberal events, pointing a camera at people, and causing a scene. Bennett, who of late has been keeping company with conspiracy theorist Alex Jones, has also faced accusations of fat-shaming, transphobia, anti-Semitism, trolling, and other bad behavior.

These transphobes at the #WomensMarch shamed Alexandra Jones and I for being proud women of color that identify as goldfish pic.twitter.com/DbJPxZcah2

You should start a campaign to get yourself some clothes and therapy, whore https://t.co/c5hb0OqviR

Liberals don’t take too kindly to her antics. Many reacted with glee to reports last winter that Bennett had defecated on herself at a college party while passed out in a hallway. There is also a photo that purports to be of the incident.

Bennett herself has not commented on the veracity of the allegation, and the picture itself is from behind. Thus, it’s not possible to know whether it’s actually her.

Since then, Bennett has been dogged by people calling her “poopy pants,” sharing the picture and other photoshopped images, and otherwise using the allegation that she crapped herself to troll her. Barstool Sports even published a tongue-in-cheek “investigation” of the claim; Bennett’s Twitter bio currently includes an accusation about the author of that article.

Walking around harassing people is not a job, but ok miss poopy pants. pic.twitter.com/Sy9qo5hQEJ

Yesterday, Jaboukie Young-White’s account joined the chorus, pretending to be Bennett, changing his avatar and name, and tweeting repeatedly about poop.

“Sh*t is not even that unhygienic! We all do it! Scientifically, you can eat sh*t and still survive in most countries. And my American sh*t is clean, steam and all,” read one of Jaboukie’s tweets, screenshots of which are circulating on Twitter.

Another said, “Hillary lost the election, I lost control of my bowels. But only I have an AR-15.”

Twitter troll @Jaboukie appears to have deleted their account after falsely impersonating @KaitMarieox, a direct violation of Twitter TOS, which was encouraged by multiple large bluecheck accounts pic.twitter.com/J1vUfyMdCQ

Other right-wing figures were equally upset.

Jaboukie did not respond to a request for comment sent to an email address included in the account description, which also states that it’s a parody.

Posobiec wasn’t entirely satiated by the account going away, seeming to take the position that people with verified accounts who encouraged Young-White, who is also verified, should be punished.

When far-left bluechecks do it to @KaitMarieox they celebrate

Bennett’s fans were elated, of course. Young-White’s fans and the many who take issue with Bennett, on the other hand, were disappointed.

“This tweet rules. Free my man Jaboukie,” said one supporter.

both of these should’ve stayed in the drafts @jaboukie pic.twitter.com/BBWEB6cFfr

Kaitlin Bennett gets so much undeserved crap from people. They hate her because of what they think she represents, so they have no problem dehumanizing her and strawmanning all of her positions. Especially fellow "libertarians."

me going to hell for cyberbullying kaitlin bennett and coming back to haunt her pic.twitter.com/f84yaRKpIn

Me trying to forget that picture of Kaitlin Bennett covered in sh*t pic.twitter.com/rxHckgOXTI

“Can we all collectively stop giving any attention to that Kaitlin Bennett girl, honest to god who cares,” tweeted @dylantaylorr.

For her part, Bennett seems to enjoy the attention.

Liberals want me to drop dead so bad, but I'm not going anywhere. You should all see a doctor and get medication to cure your Kaitlin Bennett Derangement Syndrome.

While everyone on Twitter was hating on me, I was busy getting a tour of the White House. Thank you to the Trump administration for letting me see where the greatest President in our nation's history makes America great! pic.twitter.com/mkfEfXWJUK

It is not yet known whether the account will return or if this is the end of the trolling road for Young-White.