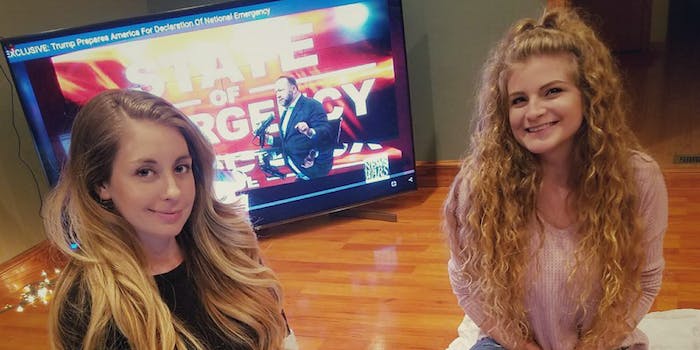 Twitter is calling it 'the saddest picture on the internet.'

Remember Kaitlin Bennett, the so-called Kent State Gun Girl who posed with an AR-10 for a graduation photo? She’s going viral again, this time for hanging out with an InfoWars reporter during an Alex Jones-fueled sleepover.

Of course, the next time the two get together, they should consider getting some tables and chairs.

Twitter began dunking on the two conservatives after Bennett posted a photo of herself with InfoWars reporter Millie Weaver on Saturday night. In the photo, the two women sit cross-legged on pillows in front of a widescreen TV on the floor with an InfoWars video on. Notably, both women are sitting on the floor, and there is no furniture except a set of Christmas lights placed against the wall. It’s unclear who owns the apartment.

“Having an InfoWars sleepover with @Millie__Weaver watching Alex Jones videos! #FreeAlexJones” Bennett tweeted, after which sharing a photo of herself being “christened” with the InfoWars mic during the “#InfoWarsSleepover.”

I christen you, Kaitlin Bennett, an Infowars Reporter! 😁 https://t.co/6Jgk3MTlNe

As far as sleepovers go, the conditions for this one look incredibly barren, to say the least. Bennett and Weaver have no back support, plus there isn’t a table for comfortably placing food and drinks. Combine that with the widescreen TV sitting on the floor, the sloppily placed Christmas lights, and yes, the incredible premise for the sleepover, and this Saturday night hangout looks like a snore.

How come all of you right wing nutjobs live in squalor?

Y'all break into an empty apt with a TV and some pillows?

refusing to buy basic furniture to own the libs

Then there’s the concept. Watching the frenetic rantings of Alex Jones on InfoWars is far from a relaxing Saturday night sleepover idea.

There it is, the worst phrase in the English language, “Infowars Sleepover.” Right above “stomach pump birthday” and “fish hook jock strap.” https://t.co/KQYH3FQQk0

Would rather have my three year old wet the bed every night than have an Alex Jones sleepover https://t.co/7qhDqG4ZEm

Computer show me the saddest picture on the internet

Bennett’s sleepover comes just one month after Twitter user @kathasty posted a viral tweet with a grotesquely minimalist apartment, arguing “guys really live in apartments like this and don’t see any issue.” In Bennett and Weaver’s case, they represent the polar opposite side of @kathasty’s post: Sometimes women have poorly decorated living rooms.

The Daily Dot reached out to Weaver and Bennett for comment about the sleepover’s conditions and is awaiting a response.