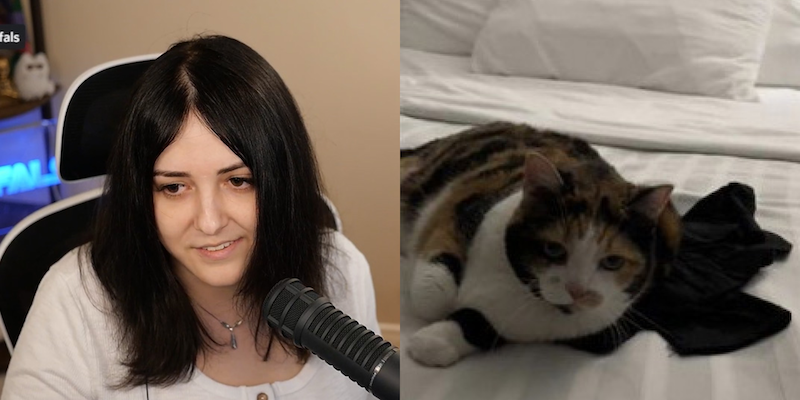 Twitch star went to hotel to escape harassment. People found her through a photo of her room

A popular trans streamer who has been the subject of dangerous harassment says the people targeting her forced her to not only move out of her home but switch hotels because they found her there, too.

Clara Sorrenti, who goes by Keffals online, posted a photo of her cat on hotel bed sheets earlier in the week.

“I am comfy and safe in a hotel with my fiancé and our cat and I am rigging up a streaming setup with a laptop I bought today so I can go back to normal before all this crazy shit happened,” she wrote at the time.

The streamer reportedly moved into a hotel after being arrested at gunpoint by the London Police Service. Anti-trans trolls moved from harassing her online to posing as Sorrenti to send death threats to London council members in her name and claim that she killed her own mother, according to Metro. This reportedly led to her being arrested by police and having her electronics confiscated and searched. She also, according to Metro, accused the officers involved of repeatedly using her dead name—the name she was given at birth and has not used since coming out as trans.

But Sorrenti’s decision to move to a hotel out of fear for her and her fiancé’s safety didn’t pan out as well as she had hoped.

“The hotel I was staying at got doxxed so I had to move hotels,” she told Global News. “Five different pizza companies sent pizzas to my hotel room in my (birth) name. Obviously, the pizza itself isn’t the problem. It’s the threat they send by telling me they know where I live and are willing to act on it in the real world.”

She also expressed suspicion that people figured out where she was staying based on the bed sheets.

All of this comes after Sorrenti was temporarily banned from Twitch, where she makes her living as a streamer, for discussing the anti-trans harassment she receives on a regular basis. The ban was reportedly over her using “hateful slurs”—meaning, repeating the things people said to her in response to her talking about LGBTQ+ issues on the platform and merely existing publicly as a trans person.

This is one of the many ways Twitch has been accused of failing to protect and support their LGBTQ+ streamers on a regular basis.

In the real world, police say they are investigating the harassment Sorrenti has been receiving, including the doxing at the hotel.

“I’m not backing down,” Sorrenti said. “I know that the work I do is incredibly valuable, and thousands of trans people told me that I have people almost every day saying they came out to their families because of me.”

The Daily Dot reached out to Sorrenti via email.