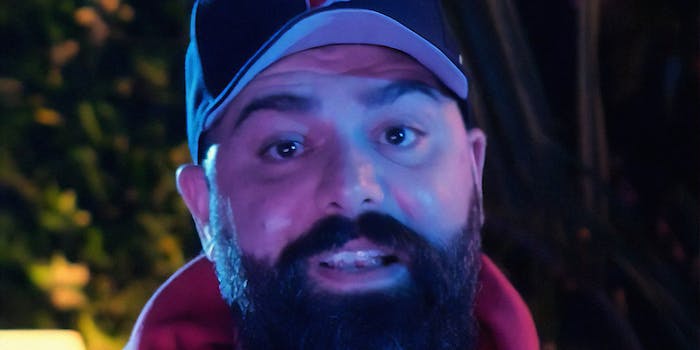 The song references late Shinee singer Kim Jong-hyun, who died by suicide in 2017.

Controversial YouTuber Keemstar and streamer Void came under fire yesterday when they were accused of mocking a K-pop artist who died by suicide in a new collaborative diss track.

Keemstar, born Daniel Keem, reports on gossip within the YouTube community on his DramaAlert channel. He’s a veteran troll and shitposter who revels in pissing off strangers on social media.

Keemstar succeeded brilliantly with his latest Void collab, titled “KPOP STANS DISSTRACK.” Over a dollar store trap beat, both streamers drop bars against a slew of Korean pop groups, including BTS, Blackpink, and Shinee, as well as their fans. The chorus to the track goes “All stans are the same, they’re rotting my brain.”

The verses utilize several negative stereotypes that are common among K-pop haters: K-pop artists are sexually repressed record label puppets who have no personal or creative agency, and their fans devour the music without realizing they’re being exploited by these massive entertainment companies.

Twitter users slammed Keemstar and Void for the diss track, which comes roughly a week after a white gunman killed six Asian people across three Atlanta-area spas, and instances of anti-Asian violence have skyrocketed across the United States.

“At a time when Asian hate is so high, posting an entire diss track about Asians and using stereotypes to ‘other’ them is fucking gross,” @honeymoonjoon tweeted.

“I’m sick and tired of people like this having a platform and sponsors out the ass when this is the content they choose to create,” @honeymoonjoon continued. “It’s hateful and racist.”

Other viewers took issue with the fact that the “KPOP STANS DISSTRACK” video includes an image from late K-pop singer Kim Jong-hyun’s funeral. Jong-hyun, who served as the main vocalist of the South Korean boy band Shinee, died by presumed suicide in 2017. He had previously written about his intense depression and struggles with fame.

The accompanying lyrics at this point in the song are, “What these corporations doing to these kids just ain’t right / Smashing on the motherfucking beat like I’m all might / I wonder why lately man they all committing suicide.”

K-pop fans have flooded the comments of the video and downvoted it en masse. At the time of this writing, it has roughly 7,000 upvotes and 30,000 downvotes.

“I’m not even a kpop stan but making fun of someone’s suicide is too fucking far,” the top comment reads. “Plus you’re supposed to hate the fans, not the artists who are literally just trying to make a living.”

Keemstar appears to be taking the backlash in stride, laughing about the death threats he’s received and claiming he did not mock Jong-hyun’s suicide in a short video posted to Twitter. He said Void wrote and recorded those lyrics without Keem’s knowledge, adding, “Void is 100% to blame.”

Void corroborated Keem’s innocent plea in a video statement of his own. He also defended his lyrics and tried to contextualize them.

“I’m clearly stating that the pressure, the anxiety induced by these corporations that run these K-pop and idol groups is the reason for why they’re committing suicide,” Void said. “And I’m saying it’s wrong. I’m calling them out. And that’s why I’m making a diss track on them. In no way, shape, or form am I mocking anybody’s suicide.”

Void also defended his lyrics about K-pop artists’ diets, saying that he was criticizing the “strict diet regimens given from the corporations to the K-pop people,” not making fun of eating disorders.

Many people replied to Void and said he should have clarified in his song title that he was dissing the K-pop industry, not the fans. They also pointed out that Jonghyun was one of the first K-pop artists to exercise significant creative agency over his music, which invalidated many of Void’s criticisms.

“This response is pretty shit,” @honeymoonjoon tweeted. “Do you make videos like this about the US music industry as if it’s a monolith where everyone is the same and being abused? What about the Canadian music industry? The UK? Germany? Maybe ask yourself why that is. The answer seems obvious to me.”

Needless to say, the scuffle did nothing to soften Keem or Void’s opinions of K-pop fans.

“Also just wanna clear any confusion and  say in no way am I apologizing to these creeps. I will never delete the video and I don’t care if you get triggered,” Void tweeted last night. “Kpop stans will always be a disease and I will never feel threatened by you and am prepared to face you all.FUCK KPOPSTANS.”