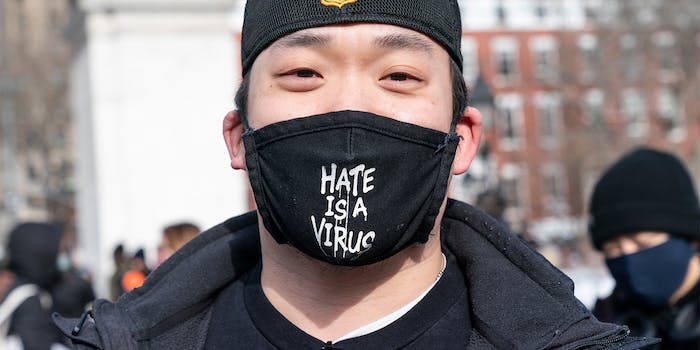 ‘Call a hate crime what it is’: Asian activists say Atlanta shooting was unquestionably racist

'Trump and his right wing accomplices have been stirring up racist, anti-Chinese sentiment for years.'

A white man shot and killed eight people—six of whom were Asian and seven of whom were women—across three massage parlors in Atlanta last night, the New York Times reports. Now, a scramble to frame the crime is emerging online.

The suspect, 21-year-old Robert Aaron Long, first attacked Young’s Asian Massage in Atlanta suburb Acworth. Four people died in the attack. He then targeted Gold Spa and Aromatherapy Spa, which are across the street from one another in northeast Atlanta. Police found the bodies of three women at the former, and one additional body at the latter.

Police captured Long about 150 miles south of Atlanta after a manhunt.

Stop AAPI Hate, a nonprofit organization that tracks incidents of racism and xenophobia against Asian Americans and Pacific Islanders in the United States, addressed the shootings in a statement yesterday.

“This latest attack will only exacerbate the fear and pain that the Asian American community continues to endure,” the statement partially reads. “Not enough has been done to protect Asian Americans from heightened levels of hate, discrimination and violence. Concrete action must be taken now.”

Details about Long and his victims are still emerging,  and many publications have thus far refrained from calling the shootings “racially motivated.” On Twitter, however, thousands of Asian American people are condemning the shootings as a hate crime and sharing their own experiences of anti-Asian racism.

“Call a hate crime what it is,” actor George Takei tweeted. “And GOP leaders, stop fanning violence with anti-Asian rhetoric. You should be ashamed at what you have unleashed.”

“People arguing that the Atlanta shootings may not have been an anti-Asian hate crime are too busy making lurid speculations & overlooking that the majority of people killed were Asian American WOMEN,” culture journalist Jae-Ha Kim tweeted. “This white man allegedly sought out 3 separate spas to kill AsAm WOMEN.”

Numerous Asian American people shared their own experiences with racism and urged their peers to show solidarity with them.

“This time last year, I was shopping in Asian grocery stores exclusively because I was getting hostile stares whenever I shopped elsewhere,” director and screenwriter Kulin Kuang tweeted at the beginning of a thread. “I kept an eye on the exits at all times in case it was a target for a mass shooting hate crime, which never happened.”

Many people attributed the rise in anti-Asian hate crimes over the past year to the racist language employed by former President Donald Trump and other GOP members when discussing the coronavirus pandemic.

“Thinking a lot about how, as president, Trump spent a year using anti-Asian rhetoric to create a COVID scapegoat, and how he’s personally responsible for these mass murders,” Bitch Media social media editor Marina Watanabe tweeted. “He’s out of office, but the consequences of his administration will linger for a very long time.”