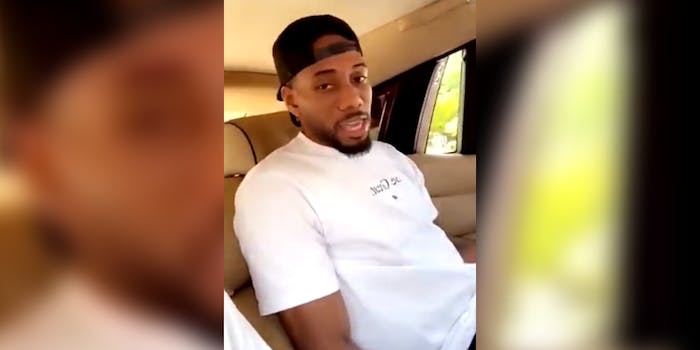 NBA star Kawhi Leonard inspires ‘what it do, baby?’ meme

NBA star Kawhi Leonard wants to know, “What it do, baby?” Even those who have no idea what is going on in the world of basketball are enjoying a meme inspired by the Toronto Raptor player.

Fellow Raptor Serge Ibaka posted a Snapchat video of Leonard uttering the iconic phrase after the Raptors won the 2019 NBA Championship on June 15. The clip was reposted to Twitter by user @MSlickk, gaining over 800,000 views and 35,000 likes.

My guys! Kawhi kills me pic.twitter.com/oiKFPnlCBX

The NBA star’s reply attained meme status when a shortened version of the clip was posted later this month, earning over 25 million views.

Users began using Leonard as a reaction meme, especially applying it to dating struggles. It’s exactly the type of phrase you hear when “men answer the phone after the’ve watched you call their ass about 10 times” or “when she remove all the boyfriend pictures and start tweeting men ain’t shit.”

This is how men answer the phone after the’ve watched you call their ass about 10 times….

When she blocks me on everything, but i *67 & she picks up https://t.co/1YrybEVevY

When she remove all the boyfriend pictures and start tweeting men ain’t shit. https://t.co/Hc4upfxRlS

Users applied the meme to some of the most relatable and disappointing moments in life.

Me: Ahh I finally graduated from school. I can’t wait to see what the future holds for me.

One user perfectly summed up the feeling that comes with a low account balance and monthly subscriptions.

As it turns out, “what it do, baby?” is a fitting reaction for a pretty wide range of situations, from being ghosted to graduating from college to when Clippy pops up in Windows 97.

When a baby hands u a toy and u have no idea what it does pic.twitter.com/75fwWQgy4m

This week, Leonard declined the Raptors’ 2019-20 player option worth more than $20 million to become a free agent. Ahead of deciding his next move, he reportedly plans to meet with the Los Angeles Lakers and the Los Angeles Clippers. We’re guessing he plans to ask the teams who want him, “What it do, baby?”