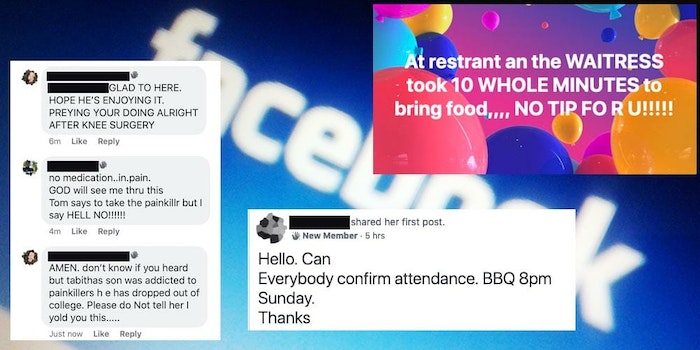 In this Facebook group, young people pretend to be Baby Boomers

It's easier to laugh than it is to cry...

Baby Boomers have always had a … shall we say, complicated relationship with social media. Although our older relatives clearly love using Facebook, many of them are just so darn bad at it.

This holds to be true for anyone who has ever been the recipient of a wall post that should have been a private message, groaned at all-caps and/or TMI comments, or was tagged in an offensive political meme. Speaking to the latter point: not to mention that we have an entire generation mostly to blame for electing a reality television star as president.

In fact, the proliferation of Boomers on Facebook has caused many under the age of 50 to abscond from the platform altogether.

Some who have stuck around, however, have found relief in the form of a new-ish Boomer-mocking Facebook group appropriately called: “A group where we all pretend to be Boomers.”

The group received added attention this week, ironically due to a tweet that went viral. “Joined that Facebook group where you can only talk like Boomers and I’m having the time of my life,” posted Twitter user @manhattanna, along with some screenshots of the type of posts one can expect from the group.

joined that Facebook group where you can only talk like Boomers and I’m having the time of my life pic.twitter.com/YfvtD9OhiN

To get into the closed group, currently boasting over 60,000 members, one must complete a brief survey that asks some basic questions to be reviewed by admins and moderators.

Although “questions,” is more appropriate, since even the membership form stays true to the theme of the group, with the following three entries to fill out:

Where did you hear of this here group?

Limit out of character talk, if you need an open forum/group head over to A group where we pretend we’re normal, okay?

“Topics” found in the group range anything from political content and misconstrued motivational quotes to discussions about food and recipes. And of course, plenty of purportedly unwelcome hot takes, casual racism, and homophobia interjected into virtually any subject. Just like real life!

It’s almost like an old people version of the Matrix—although thankfully, one we can actually unplug from.