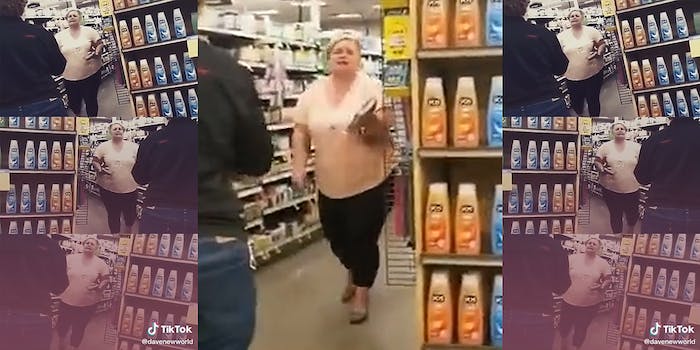 'I command you in Jesus Christ's name to get off this aisle!'

An unmasked woman demonstrated a woeful misunderstanding of the biblical accounts of Jesus Christ casting out demons when she invoked the Lord’s name to force people out of a grocery store aisle.

The public tantrum took place at a Fred Meyer grocery store in Longview, Washington, according to TikToker @fiftyshadesofwhey, who uploaded the video yesterday. (They uploaded a longer version to Twitter as well.) The video shows a woman, hereby known as “Holy Karen,” bellowing at several masked shoppers to get out of her aisle so she can shop and ignore proper pandemic etiquette in peace.

“I command you in Jesus Christ’s name to get off this aisle!” Holy Karen shouts as she marches toward an employee who tries to calm her down, maintaining far less than six feet of distance between them.

“You need to leave, in Jesus Christ’s mighty name!” she yells at the employee.

Holy Karen then pivots back to the aisle and rebukes another woman in her crosshairs.

“Get off this aisle! You are a demon!” Holy Karen shouts.

She continues to prowl the aisle as other shoppers gaze incredulously from the fringes. The accosted employee stops one man from entering the aisle for the sake of his own wellbeing.

“That’s right, until I buy something, then I will happily leave,” Holy Karen yells. “I rebuke you all and cast you into the lake of fire in Jesus Christ’s mighty name.”

“What is wrong with people?” another shopper asks. “Is that the way you think you’re really gonna get your message across?”

Apparently, other Fred Meyer shoppers did not share Karen’s conviction. A second video, uploaded to Twitter by @TeraLee67964018, shows a man pinning Karen down at the front of the store as she yells, “Let go of me!”

“She can say whatever she wants, but she was getting in elderly ladies’ faces and stuff, and that’s not cool,” the woman filming the second video says. “They were on the aisle, and she was screaming in their faces and chasing them off.”