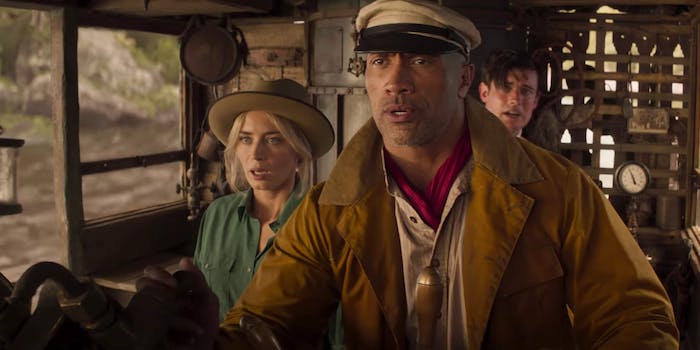 ‘Jungle Cruise’ trailer looks like a lot of trashy fun

What is even going on in this?

The latest trailer for Jungle Cruise is here, and while the jury is out on whether it’ll be a good movie, it at least looks like it’s going to be a lot of trashy fun.

Based on the Disney park ride, Jungle Cruise will follow an explorer (Emily Blunt) who gets a reluctant riverboat captain (Dwayne “The Rock” Johnson) to help her find a legendary tree hidden in the Amazon that’s purported to have healing powers—a tree that he’s spent years trying (and failing) to find.

It’s a simple enough premise, and, a la Pirates of the Caribbean, the actual lore behind the Jungle Cruise ride is thin enough that Disney could just plaster your average adventure story with a recognizable trademark and call it a day. It’s even got the Adventure Trio—a sensible woman playing it straight so she’s taken seriously, a roguish and slightly jaded expert who mostly coaxes on his charm, and a (potentially hapless) sidekick who’s mostly there for comedic relief—along with a human villain played by a properly mustachioed Jesse Plemmons.

But Jungle Cruise doesn’t stop there. In this trailer alone, we see that the film is willing to get absolutely weird and fun, almost in the same vein as the 1999 Mummy film or a Pirates of the Caribbean sequel, but if the latter was actually fun. Alongside a magical healing tree, you have a poorly CGI’d snake just popping out of one man’s cheek, a muddy and viney version of Davy Jones, lots of bicep grabbing, and the Rock uttering the phrase, “Who brings a submarine to the Amazon?” (Who does that, honestly?!)