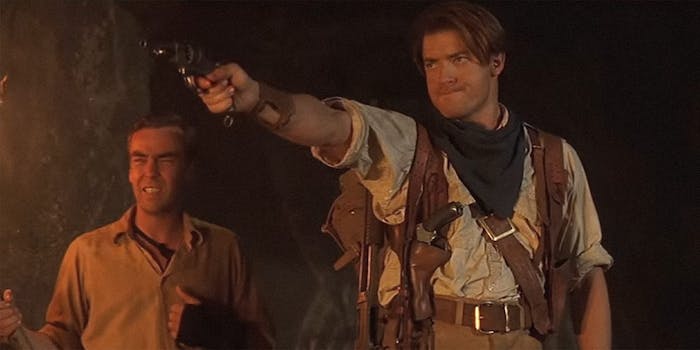 The 1999 ‘Mummy’ movie is so much better than you remember

It still holds up.

Reviews for The Mummy, the 2017 blockbuster starring Tom Cruise and Sofia Boutella that launches Universal’s newly announced shared universe of monster movies, are out and they’re, to put it lightly, not great. It’s been dubbed “an irredeemable disaster” and “the worst Tom Cruise movie ever,” described as being “crippled by a failure of imagination,” and criticized for its terrible treatment of women and how it didn’t explore the titular Mummy beyond the archetype of a sexualized female villain. As of press time it has a 21 percent rating on Rotten Tomatoes and numerous reviewers have told people to just see Wonder Woman instead.

But if there’s a silver lining to the existence of The Mummy, it’s a reminder that at least one good Mummy movie already exists.

We’ve seen our fair share of Mummy movies over the past 85 years since Boris Karloff first took up the mantle. The titular mummy—who, until Boutella, had always been played by a man—had previously appeared in 14 different films. And while you’ll find many horror fans who laud the classics, the conversation in the wake of The Mummy’s bad reviews has centered around one particular film—with a certain level of Schadenfreude.

Brendan Fraser as he sees all the bad reviews for The Mummy pour in. pic.twitter.com/LCI7ugoTdk

good news everyone: the Brendan Fraser MUMMY is still amazing

Instead of going to watch the new iteration of #TheMummy, can we all just agree to each send Brendan Fraser a $12 check?

The last time we saw The Mummy brought to life was through the blockbuster film trilogy starting nearly 20 years ago. The first movie, loosely based on the original 1932 film, starred Brendan Fraser and Rachel Weisz and was more action-adventure than horror with hints of romance. In The Mummy, the ancient Egyptian high priest Imhotep (Arnold Vosloo) is accidentally awakened, and he goes on a killing spree and reign of terror in 1926 Egypt, leading ex-soldier Rick O’Connell (Fraser), librarian Evelyn Carnahan (Weisz), and her brother Jonathan (John Hannah) to send him back to the afterlife.

Just to make it clear, The Mummy (1999) isn’t necessary a cinematic masterpiece. It has a 57 percent rating on Rotten Tomatoes and has all of the marks of a summer popcorn movie. But it has something that 2017’s The Mummy—according to reviews, anyway—is missing: fun.

In his 1999 review, Roger Ebert gave the film three out of four stars called it “good trash.”

“There is hardly a thing I can say in its favor, except that I was cheered by nearly every minute of it,” Ebert wrote. “I cannot argue for the script, the direction, the acting or even the mummy, but I can say that I was not bored and sometimes I was unreasonably pleased. There is a little immaturity stuck away in the crannies of even the most judicious of us, and we should treasure it.”

The 1999 Mummy film has a lot going for it. It brought us Fraser as a believable action film star (even though his character has many shades of Indiana Jones) and Weisz portrayed a fully realized female character who had her own motivations outside of the story of a man. While she might not be what we think of as a “strong female character” today, Evelyn was capable of handling herself and taking charge when her brother often couldn’t. Despite the supernatural elements of the horrors and plagues Imhotep brought forth, the threat felt real—and who could forget the imagery of scarab beetles eating someone alive from the inside?

On the other hand, the film never took itself too seriously. You could show Imhotep devouring one of the men who stole the preserved organs of his love, Anck-su-Namun, in one shot and see him spooked by a cat minutes later—but he still remained a terrifying and powerful villain.

Even years later, the movie still holds up both as the beginning of a series and its own film. Some action movies from the late ’90s and early ’00s might be remembered more fondly, but The Mummy should be touted among them.

The sequel to The Mummy, The Mummy Returns, isn’t as good as the first movie, but it still has an engaging story with the original cast. And while it does have the annoying kid character in Rick and Evelyn’s 8-year-old son, Alex, it did give us Dwayne “the Rock” Johnson as the Scorpion King. And the third movie, The Mummy: Tomb of the Dragon Emperor, received an even lower Rotten Tomatoes score than the 2017 Mummy film.

If anything comes out of The Mummy’s resurrection, it might be that people will finally revisit the earlier series in comparison. And if you’re looking for more Fraser in your life, you’re in luck. He’ll be appearing in the FX anthology series Trust and stars in AT&T Audience Network’s Condor, along with a recent appearance on The Affair.