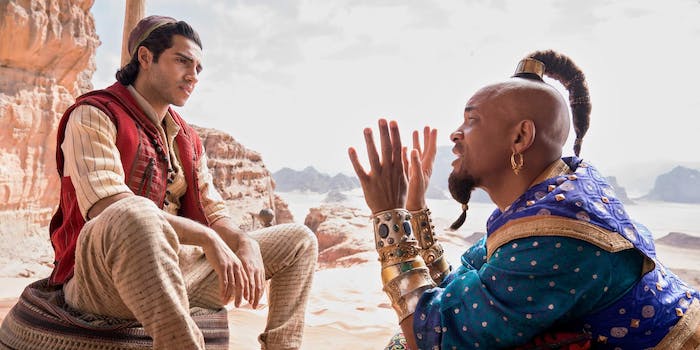 An ‘Aladdin’ sequel is in the works

John Gatins and Andrea Berloff are set to write the script.

After making more than $1 billion at the box office, Disney is moving forward with a sequel to its live-action Aladdin remake.

Confirmation that Disney was exploring a sequel first emerged over the summer. Producers Dan Lin and Jonathan Eirich are back on board while John Gatins (Flight) and Andrea Berloff (Straight Outta Compton) are set to write the script.

The sequel is set to be a new idea—and not adaptations of animated Aladdin sequels like Return of Jafar—and was the result of Disney spending several months fielding suggestions for a new film. Although it’s not clear that the sequel will be based on a story from One Thousand and One Nights, that collection of stories was consulted at one point.

Director Guy Ritchie and cast members Mena Massoud, Naomi Scott, and Will Smith are expected to return, although formal offers won’t be made until a script is done, according to the Hollywood Reporter.

Disney fans are no stranger to sequels to classic Disney films, but there is one key difference between the animated sequels that emerged in the late ’90s and early ’00s. Many of those sequels (which included Return of Jafar) were designated to be released straight to video, but the live-action sequel to the Aladdin remake will be a theatrical release, not one meant for Blu-ray or Disney+.

However, while Disney is hedging its bets on audiences wanting an Aladdin sequel, a $1 billion box office haul isn’t necessarily a guarantee for a live-action sequel’s success. Alice in Wonderland made over $1 billion worldwide in 2010, but the 2016 sequel Alice Through the Looking Glass only made a fraction of that at $299 million.