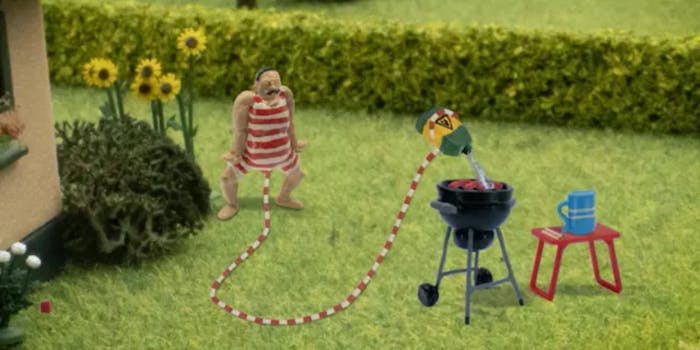 In yet another example that 2021 is off to a fine start, on Saturday Denmark launched an animated children’s program titled John Dillermand, about a man with an “extraordinary” prehensile penis that gets him into mischief. For those wondering if there might be some subtlety or nuance involved—surely, a show for kids couldn’t really be about an actual penis—”diller” is Danish slang for penis, so the show’s title literally translates to “penis man.” (You can watch the first episode here.)

Basically, it’s like Curious George only instead of a monkey, The Man with the Yellow Hat had a giant dong that got him into trouble. This also begs the question, since the program is animated, couldn’t it just have been a monkey or other animal with a long tail that had a mind of its own? John Dillermand, folks.

Unfortunately, the timing of the series couldn’t be worse, as Denmark is currently dealing with its own #MeToo reckoning. However, Erla Heinesen Højsted, a clinical psychologist who works with families and children, told The Guardian that the criticism John Dillermand is receiving may be unfair or blown out of proportion. “John Dillermand talks to children and shares their way of thinking,” she said. “And kids do find genitals funny.”

This is absolutely true. And you know who else finds genitals funny? Adults on the internet! As Twitter got word of the scandalous show, people reacted with shock and horror—but mostly amusement, as you can see from some of the reactions below.

DR, the public-service radio and television broadcasting company that airs the program, has since issued a statement responding to the backlash. It claims that the show could have just as easily been about “a woman with no control over her vagina” and that “the most important thing was that children enjoyed John Dillermand.”

White people are being hella weird about Stacey Abrams