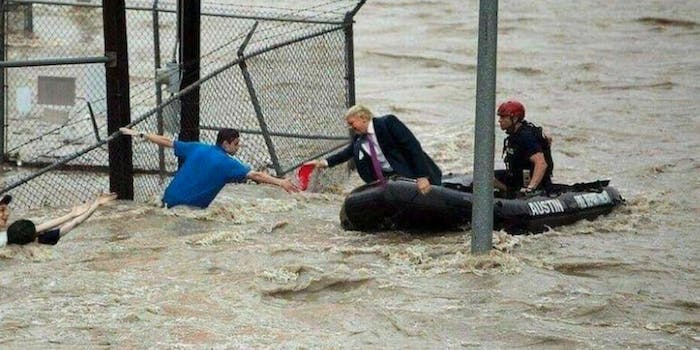 Is it ironic—or more fake news?

A year-old Photoshopped picture of President Donald Trump trying to rescue a man from flood water has resurfaced in the wake of Hurricane Florence.

A Facebook post from 2017 featuring the image has hundreds of new comments and shares as users either laughed off the meme or flagged it as fake—in case that wasn’t obvious.

The doctored image shows Trump, dressed in a suit and tie, leaning out of a raft toward a stranded flood victim with what appears to be a “Make America Great Again” hat in hand.

In the original image, three rescuers with the Austin Fire Department are trying to save a man desperately holding on to fence and are doing so without Trump on board. Researchers at Snopes were able to source the original image to a CNN news report about flooding in Central Texas in 2015.

It first appeared as a Trump meme, however, after Hurricane Harvey last year. In the days following Hurricane Florence, the image has been circulated anew.

At least two Reddit users are claiming that their relatives and friends have shared the image believing it was real, but for the most part, it seems that users find it ridiculous or funny. Some are altering the image further to create other memes.

This is the real photo. pic.twitter.com/BAjh6bUe8k

There is a difference, though, between fake news designed to misinform and satire. The difference is in the intent, and ironic meme making is rendered dead without the freedom to share Photoshopped images. Imagine if Facebook were to become an even more humorless place than it already is.