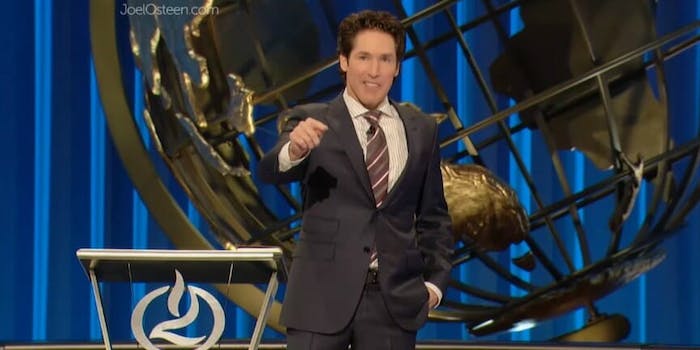 Joel Osteen preaches for first time since Hurricane Harvey, says not to have negative attitude

Attendance for church was reportedly way down.

A week after Joel Osteen was blasted for not opening his mega-church to Hurricane Harvey evacuees, the Texas pastor returned to the pulpit with this message: Don’t have such a woe-is-me attitude. He also compared himself to a certain Biblical underdog.

“We’re not going to understand everything that happens, but having a ‘poor old me’ mentality or ‘look what I lost’ or ‘why did this happen,’ you know that’s just going to pull you down,” Osteen preached on Sunday, according to the Huffington Post.

Osteen was dragged down this week after it was revealed that Lakewood Church, which can hold about 17,000 people for its services and which hadn’t suffered any flooding, didn’t open its doors to flood victims. Instead, he offered this tweet.

Victoria & I are praying for everyone affected by Hurricane Harvey. Please join us as we pray for the safety of our Texas friends & family.

He also said that he hadn’t opened the church because the city of Houston hadn’t asked. Three days later, after plenty of national outrage, Osteen changed his mind.

Victoria and I care deeply about our fellow Houstonians. Lakewood’s doors are open and we are receiving anyone who needs shelter.

On Sunday, Osteen gave a different account of the decision, saying the church was afraid that the rising floodwaters would breach the inside of the church and that was why Lakewood didn’t open its doors.

“It’s easy for somebody from a distance to make judgments without having all the information,” he said in front of a reported crowd of about 1,200, instead of the usual 16,000. “Some people that don’t have the facts and people who don’t want to have the facts will continue to try to stir things up.”

On Wednesday, that national criticism was renewed when Lakewood passed around collection plates at the end of its service. Considering there were reportedly hundreds of evacuees in attendance that evening, this was seen as untoward—essentially asking people who might have just lost everything to donate to the church.

Not everybody is unhappy with Osteen, though. Filmmaker Tyler Perry on Friday donated $1 million to help hurricane victims, and he earmarked $250,000 of that money to go to the church, saying, “I know there’s been some controversy about Joel Osteen and him not opening the doors of the church. Let me tell you something: Joel and Victoria are amazing people. There’s no way they would lock people out of the church and not let people in for shelter. There were some safety concerns. I spoke to them on the phone, and it all made perfect sense to me.”

On Sunday, despite his original thoughts regarding not having that “poor old me” attitude, Osteen also compared himself to Goliath’s nemesis. According to the New York Daily News, Osteen cited Psalms 35, saying, “I am attacked by people I don’t even know. David, I feel your pain, and you didn’t have social media, David.”

You can watch the full broadcast of Osteen’s service below.