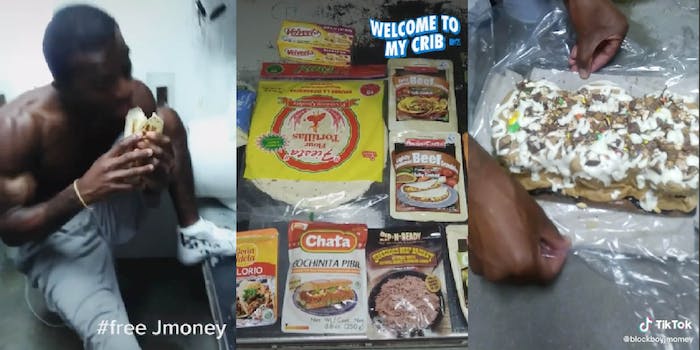 This man in prison is making burritos, cakes on his TikTok cooking channel

Jeron Combs shows his followers how he creates meals with pre-packaged food items and a makeshift grill.

Combs, 31, shows his over 160,000 TikTok followers how he creates meals with pre-packaged food items and a makeshift grill.

In another video, he manages to create a layer cake and sprinkles. Followers are praising his creativity, saying that he could be a chef. He told the Daily Mail that making his own food is better than anything the inmates get served.

He then explained how he made the makeshift grill, which can also be seen in a video dedicated to the grill. “I broke a hot pot down and took the plate out of it and sanded my bunk down to the metal to cook from it,” he told the newspaper.

Tacos, quesadillas, bacon, burritos, rice bowls, and burgers are just some of the meals he makes, with burritos being his favorite. “I make food for my cellmate and some friends at times for special occasions,” he said. “I have a passion for cooking. I have been in jail since 18 and this is where I learned all my cooking from.”

He explained that he makes all of the ingredients, and if he doesn’t have what he needs, he gets it from friends. They compile food together and “just make it work.”

One thing Combs hopes comes out of his new social media fame is the reality of prison life.

“I don’t want people to look down on us because of the mistakes we made and see that jail is a different place for some people,” he said. “Some people think that it’s all about violence and what they hear or see on TV, but it’s so much more to what people don’t see. I want to be able to enlighten them on what’s going on behind these walls.”