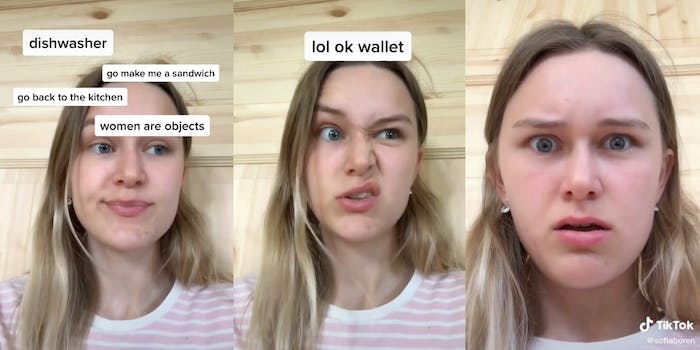 Female TikTok users say they are fighting back against the misogynistic comments they see online with the phrase “OK wallet.”

The #OKWallet trend flips the script of misogynist insults for women like “sandwich maker” or “a dishwasher.” Urban Dictionary explains that similarly to how someone may call women “dishwashers,” as in their only purpose is to wash the dishes, the “OK wallet” insult is “based on the joke that a man’s only purpose is his money.”

Jessi Balcon, a 20-year-old TikTok user from Washington, said she first saw the trend a couple of weeks ago when preteen girls were using it to fight back against misogynist comments. For her, the trend is a way to take back the advice she has been given her entire life when she has spoken out against normalized misogyny in humor: “Just play along and joke back.’”

“I think that the reason so many people are offended by it is an unawareness of the normalized misogyny that they were taught,” Balcon told Daily Dot. “When the objectification is turned around and put onto them, it becomes apparent just how hurtful that can be.”

Sofia Borén, a 19-year-old from Sweden, said she primarily sees it as an “easy clap-back” and reversal of the ways objectifying rhetoric is used against women.

“I think counter-rhetorics is crucial when it comes to internet culture,” Borén told Daily Dot. “For now, it’s just a quick clap-back at misogynists, but I hope it can inspire more funny responses. I know we need to continue developing our ways of responding to trolls, because they won’t leave us alone, so we shouldn’t let them be in peace either.”

“It’s all about clever rhetorics and who make the other person shut up,” she added.

The men of TikTok who have engaged with this trend have fired back at the response, questioning if being “used for your money” is really an insult mostly because it implies that you have money to begin with.