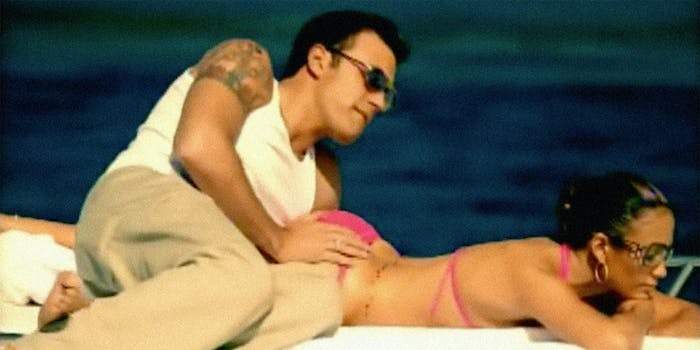 'I felt like that was pretty much the last piece of the puzzle.'

But a theory put forth in May posits that Affleck and Lopez are actually recreating 2002’s “Jenny From the Block” video 20 years later. And now with a photo of Affleck grabbing Lopez’s ass while on a yacht circulating, it looks like the theory might be legit.

The theory was floated on an episode of the podcast Busy Phillips Is Doing Her Best, by co-host and writer Caissie St. Onge, who thought that perhaps Affleck and Lopez were “shooting a shot-for-shot remake” of the 2002 video for its anniversary.

The image of Affleck similarly positioned behind J.Lo’s posterior on a yacht could just be a coincidence. But St. Onge tells the Daily Dot that when she saw those photos, “I felt like that was pretty much the last piece of the puzzle.”

In May, Affleck appeared to be wearing the same watch from the video. In June, the two shared a kiss that was captured by paparazzi, and people freaked out about this public display. But St. Onge noticed the snaps looked a lot like the scene in “Jenny From the Block” where they dine outside and are caught by paps.

St. Onge noted on Instagram that she doesn’t think this potential recreation means Affleck and Lopez are not really in love. She’s “rooting for them.”

“They are artists who make things for our enjoyment, which seems like what they are doing together,” St. Onge tells the Daily Dot. “It doesn’t mean they aren’t also rekindling a friendship or romance. I mean, Ben was also snapped taking their kids on an outing together and that seemed sweet and real and what a single dad does when he’s dating a single mom.”

The video was released in November 2002, the same month the two were engaged, so pinning this to an exact 20th anniversary might be a stretch, but does J.Lo even need to do that? The theme of “Jenny From the Block” is Lopez and Affleck being hounded by paparazzi during their relationship, which is of course happening again, but now one wonders if the “paps” are part of the production.

The photographer credited on Lopez’s Instagram is Ana Carballosa, who was the videographer on 2014 tour doc Jennifer Lopez: Dance Again and appears to be her longtime photographer. But a photo of Carballosa photographing Affleck and Lopez also circulated.

In a 2008 interview, Affleck reportedly said he regretted appearing in the video. What does the look on his face now signal? Who knows. But now we have a whole new lens to view this through.

“And if my prediction is true, and J.Lo hears about it, I hope I didn’t spoil any surprises!” St. Onge says.