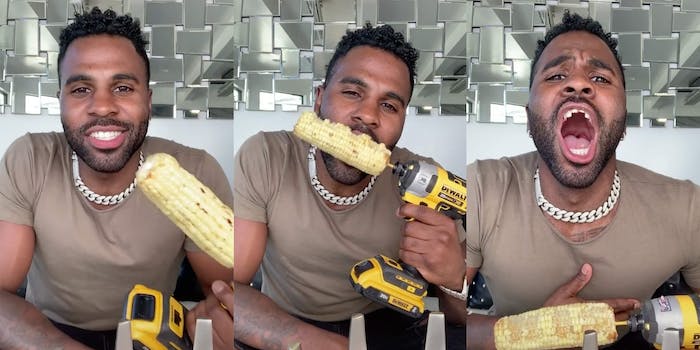 The Corn on the Cob Challenge went horribly wrong for Jason Derulo, who took to TikTok on Tuesday to try the stunt and chipped some teeth in the process.

The video begins with Derulo holding an electric drill with a corn on the cob attached to it. Derulo enthusiastically asks the camera, “Hey, have ya’ll seen this? I’ve always wanted to try it! Lifehack.”

He then attempts to eat the corn on the cob as it rotates on the drill, increasing the speed of the rotation as the video continues. Approximately six seconds into his unconventional snack, Derulo shouts out in pain and lifts his head to reveal that he has chipped his front teeth.

TMZ also reports that Derulo’s teeth were looking as good as new by Tuesday afternoon.

The singer-songwriter-turned-TikTok-star is no stranger to the app and can frequently be found sharing videos to his over 20 million followers and accumulating over 250 million likes.

Derulo is not the first to test his fate for the challenge—or chip some teeth in the process. The challenge first surfaced on the internet in 2016 when a China-based vlogger nicknamed Eater Yang posted a video of himself eating electrically rotating corn on the cob in under 10 seconds. The trend spread through the internet as people began posting themselves trading their utensils for power tools.

Some may recall the viral video from 2016 showing a girl attempting the challenge only for her long hair to be caught on the drill and partially ripped out of her head. Since then, a handful of challenge takers have suffered hard-to-watch injuries, mainly losing teeth in the process.

Four years later, the corn challenge has reemerged on Tik Tok and has made Derulo its most famous victim.