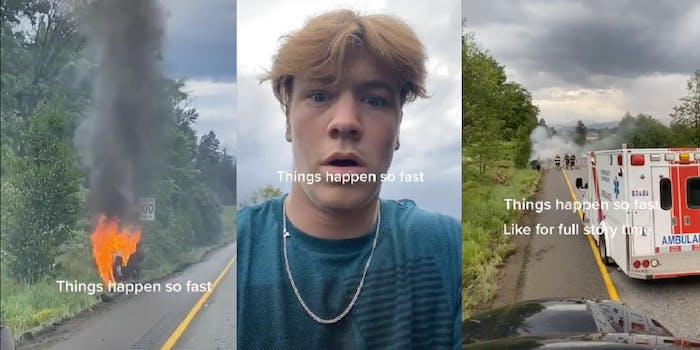 'There was some back-and-forth road rage going on.'

A video on TikTok captures the moments after two brothers saved a young woman and her baby from a roll-over car crash that could’ve left both seriously injured.

The accident happened on the evening of May 13. According to the Chilliwack Progress, Will Vader and his brother, Braden, were driving behind the woman’s Jeep when they witnessed the crash.

The brothers’ quick thinking might have saved the mom and child from a deadly fate.

Witnesses of the crash say both the woman and the other driver were at fault for the accident. “There was some back-and-forth road rage going on,” Will Vader told Chilliwack Progress. “It all happened so fast.”

The Jeep and another car were taking turns cutting one another off until the Jeep swerved off the road and crashed, Will Vader said. The other driver involved reportedly fled the scene after the crash.

The Jeep flipped into a ditch, lighting on fire due to the impact of the crash, and because the woman had jerry cans in the back of her car, he added. “The flames were rising higher and higher,” he said. “Two minutes later the car went into a big flameball.”

Will Vader said he and his brother “immediately go out of the truck and ran up to them and broke the glass and pulled the mother and baby out.”

The 19-year-old was also able to capture a TikTok of the flames after the woman and child were safe.

“It all kind of snowballed together,” he said. “In the end, this could’ve involved more than just those two vehicles, including my own, which makes me want people to chill out behind the wheel.”

The Vader brothers stayed with the woman and her child until they were taken to a local hospital. Both suffered only minor injuries, the Abbotsford Fire Rescue Service confirmed.