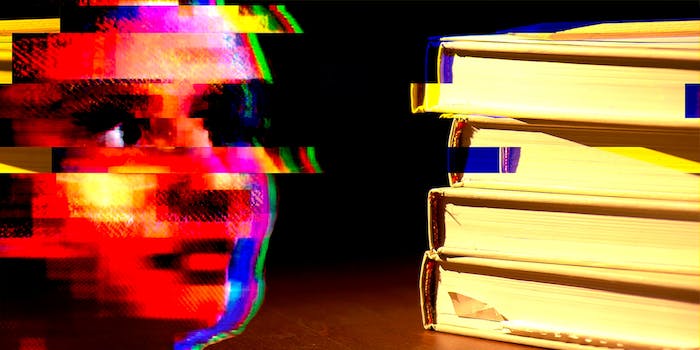 Eat your heart out, Microsoft Tay.

In the same week that Microsoft’s teen Twitter bot, Tay, was transformed into a sexually voracious Hitler apologist by trolls who abused her machine learning algorithms, a Japanese artificial intelligence program wrote a short story that was considered for a literary prize.

As the old programming adage goes: Garbage in, garbage out.

The AI-assisted novel, co-written by Hitoshi Matsubara and his team at the Future University in Hakodate, was one of more than 1,400 contenders for this year’s Hoshi Shinichi Literary Award, Vice’s Motherboard reports. Eleven of them were written (or co-written) by computers.

Matsubara’s AI-assisted book, “The Day a Computer Writes a Novel,” is about a computer that dreams of writing novels and eventually stops serving humans in order to pursue the creative life. If that seems a little on the nose, it’s because humans created the plot and characters, as well as some pre-written sentences and words—but let the computer do the rest.

“I writhed with joy, which I experienced for the first time, and kept writing with excitement,” it wrote. Damn.

Was the story persuasively human? Kind of! It passed the first stage of the four-round competition, with one science fiction author praising its plot structure. The characters, though, were said to be underdeveloped.

Bots as art, and as reflections of our humanity, are some of the most interesting things happening on the Internet right now. Artificial intelligence isn’t quite human—it has yet to develop its own creativity, but it’s becoming a compelling medium for expressing ours.

Sometimes that means writing a sci-fi novel or producing new scripts for Friends, and sometimes it means… whatever happened to Microsoft’s poor Tay bot.

At least for now, bots are only as good as the humans controlling them.

Photo via shutterhacks/Flickr (CC BY 2.0) | Remix by Fernando Alfonso III