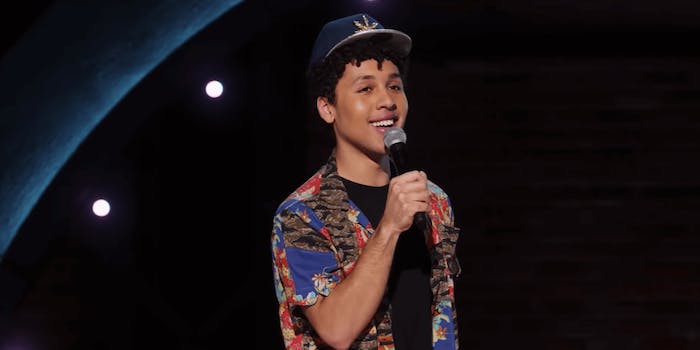 Jaboukie Young-White was once again banned from Twitter for flying too close to the sun.

The standup comedian, Daily Show correspondent, and shitposter-in-chief regularly courted controversy on the app, changing his Twitter name and making inflammatory statements while masquerading as other people or institutions. Some of Young-White’s greatest charades include the FBI, Ted Cruz, Cats, Kaitlin Bennett, and frequently, President Donald Trump.

The straw that broke the camel’s back this time was Young-White’s impersonation of CNN Breaking News. Addressing the conspicuous public absence of Democratic presidential candidate Joe Biden, Young-White tweeted, “BREAKING: Joe Biden is not DEAD. He just getting some dick. We’ve all been there cnn.com.”

According to screenshots, it appears Twitter staff first stripped Young-White of his verification before banning his account entirely. It’s unclear how long the ban will last. (Twitter did not immediately respond to request for comment.)

Young-White’s fans congregated to mourn his account ban and petition Twitter to allow him back on the platform, causing #freejaboukie to trend.

Folks who are still reeling from the loss needn’t worry too much. Several Twitter users shared Young-White’s greatest hits for the world to admire in his absence, including a video compilation from @IWriteAllDay_.

If that’s still not enough, fans can browse some of Young-White’s deleted tweets at @jaboukiedeleted, which further documents a once-in-a-generation talent.

R.I.P. to a Short King. May Jaboukie make a swift return to Twitter and craft some extra spicy content in the interim.

Update 11:32am CT, March 26: Young-White is back on Twitter, though he is no longer a verified user. According to a Twitter spokesperson, he was suspended for violating Twitter’s rules against platform manipulation and spam.