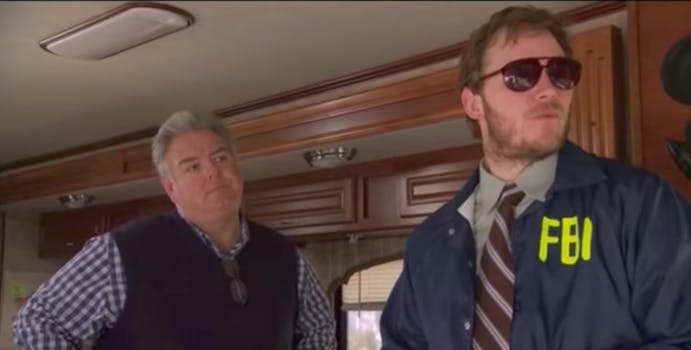 Image via Parks and Rec/YouTube

With a reality TV star in the White House, a pro wrestler angling for a 2024 bid, and everyone from Oprah to Papa John being put out as a potential candidate, who even cares about the integrity of any of our institutions?

Let’s have a damn fictional character from a TV show head up the FBI. Put Judge Joe Brown on the Supreme Court. Let’s have the Weekend Update people be press secretaries and put the horse that won the Triple Crown in charge of the Department of Agriculture. Have a celebrity chef run our school lunch policy (Ed. Note: This has already been done and failed miserably). Make Michael Phelps head of the Navy, and whatever, fuck it, put like seven rocks as the head of Treasury.

But not any old rocks, those fancy rocks. I think they’re called geodes.

LET’S PUT STAR-LORD IN CHARGE OF NASA AND OWEN GRADY CAN RUN THE PARKS DEPARTMENT AND THAT NAVY SEAL HE PLAYED IN ZERO DARK THIRTY CAN STAFF JSOC.

Let’s put Bert Macklin in charge of the FBI, smdh.

I swear am I the only one still sane in this country? The FBI should be run by Clarice Starling.