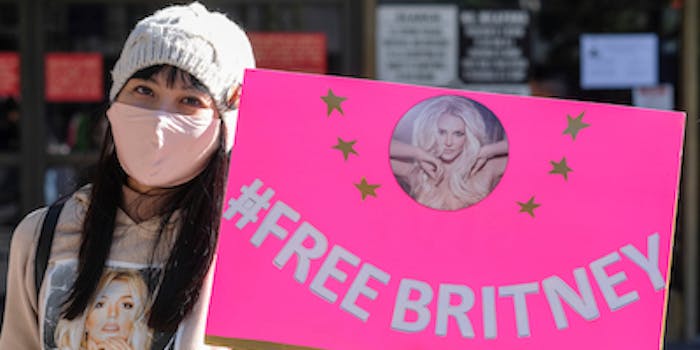 Plus: The controversy with Michael B. Jordan's rum brand.

Last summer, as the Free Britney movement took off, fans around the world began to analyze pop star Britney Spears’ social media posts. Was she trying to tell us that she needed help through the color of clothing she wore or the number of times she performed a dance move? Some people dismissed these questions as part of a “conspiracy theory.” But, as it turns out, they were right about something: Spears was not happy.

On Wednesday, Spears made a virtual court appearance to address her 13-year-long conservatorship—which advocates of the Free Britney movement have maintained that she is in against her will. Spears validated her fans’ concerns in an emotional testimony, calling her conservatorship “abusive” and requesting that a judge end it without further evaluation. “I haven’t done anything wrong to deserve this treatment,” she said. “I just want my life back.” Among the many revelations about her conservatorship was the fact that she has an IUD to prevent her from getting pregnant—but Spears wishes to get married and have another baby. She also said that she is forced to attend three meetings every week “no matter what” and is unable to visit friends who live minutes away from her. Spears’ comments were met with tweets of support from several other singers, including Mariah Carey and Brandy. (And, yes, unfortunately Justin Timberlake decided to enter the chat as well.)

The most vocal supporters, however, were the fans who have advocated for Spears for more than a year. On the Free Britney L.A. Instagram page, one of several social accounts dedicated to covering the Free Britney movement, the most recent post is a video that shows a crowd of people outside an L.A. courthouse listening to Spears’ testimony on a portable speaker. They gasp and cheer in reaction to finally hearing what she has to say.

Save 20% on Manscaped Performance Package 4.0

When you think of below the waist grooming, you think of Manscaped. And its Performance Package just got a serious upgrade with the brand new Lawn Mower 4.0. It runs at 7,000 RPM and comes with SkinSafe technology that lets you get a close shave without painful nicks and snags. It’s waterproof too, so you can use it in the shower for quick and easy cleanup. There’s even a 4,000k LED spotlight for optimal precision.

Manscaped is offering 20% off and free shipping exclusively to Daily Dot readers. Now’s your chance to see why more than two million men worldwide trust Manscaped for their personal grooming needs.

Why Black TikTok creators are striking

A crucial experiment is happening on TikTok: Many Black creators are effectively striking, refusing to produce a new dance for Megan Thee Stallion’s “Thot Shit.”

It’s been very revealing: Megan Thee Stallion songs are a consistent source for TikTok dance trends, but Black creators rarely get credit for producing them. Jalaiah Harmon and Keara Wilson are just two recent examples of Black women who’ve originated a piece of choreography, which then gets copied by mega-popular TikTokers and siphoned onto the FYP, where credit is often obscured and white creators elevated. —Audra Schroeder, senior writer

Michael B. Jordan recently became the latest celebrity to premiere his own brand of liquor, but it was immediately met with pushback and accusations of cultural appropriation over its name: J’Ouvert, which is also the name of a festival that takes place in Trinidad and Tobago (where the rum is distilled).

Jordan’s name isn’t attached to the trademark, but he still faced much of the backlash since it’s his brand of rum. “I just wanna say on behalf of myself & my partners, our intention was never to offend or hurt a culture (we love & respect) & hoped to celebrate & shine a positive light on,” Jordan wrote on Instagram Stories. “We hear you. I hear you & want to be clear that we are in the process of renaming.” —Michelle Jaworski, staff writer