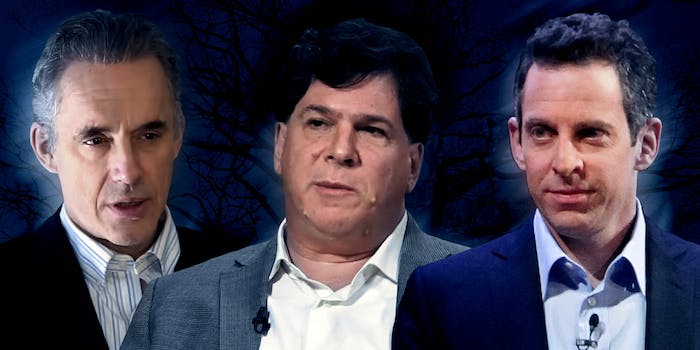 Twitter is roasting the ‘Intellectual Dark Web’ with memes

Sadly, the so-called I.D.W. is not as cool as it sounds. It’s a loosely associated group of academics, comedians, and writers who feel that freedom of speech is under attack and that identity politics are making honest discourse all but impossible. People associated with the group include everyone from philosopher Christina Hoff Sommers to comedian and podcaster Joe Rogan.

Weiss’ article purports that these people feel that they are “locked out of legacy outlets” and must create their own. Naturally, the group—and its name—became a meme.

Kudos to all the gang on the Intellectual Dark Web for their big New York Times write-up pic.twitter.com/xdhwYOkcy5

The Times portraits of the people in the I.D.W. also set up a lot of jokes.

meet the wood elves of the intellectual dark web pic.twitter.com/yC5NUVrmws

I just wanna know why the Intellectual Dark Web meets in the woods outside Hogwarts pic.twitter.com/agRgfwjwLr

If you haven’t heard of the Intellectual Dark Web before, that’s because it’s a relevantly new term, coined, somewhat sarcastically, by economist and writer Eric Weinstein. He created the term, and perhaps codified the movement, after his brother, biology professor Bret Weinstein, wrote a letter to his fellow faculty at Evergreen State College, objecting to the “Day of Absence” in which white students, faculty, and staff were asked to leave campus for the day. The letter, in which Weinstein argued that “[o]n a college campus, one’s right to speak—or to be—must never be based on skin color,” caused an uproar at the school and Weinstein was told that if he chose to stay, campus police would not protect him. Eventually, he resigned and reached a $500,000 settlement deal with the school.

While L.A Times columnist Meghan Daum says the group “wish to foster a new discourse that can allow innovative thinkers to wrestle with the world’s problems without having to tiptoe around subjects or questions deemed culturally or politically off-limits.”

Weiss steers clear of outright endorsing the movement in her piece, worrying that in their quest for free speech the I.D.W. are giving voice to some dangerous and hateful people, as Joe Rogan did when he let Alex Jones rant for almost four hours on his podcast.

“I get the appeal of the I.D.W,” she writes near the article’s conclusion. “I share the belief that our institutional gatekeepers need to crack the gates open much more. I don’t, however, want to live in a culture where there are no gatekeepers at all. Given how influential this group is becoming, I can’t be alone in hoping the I.D.W. finds a way to eschew the cranks, grifters and bigots and sticks to the truth-seeking.”

That hasn’t kept some people from mocking the article by saying that that cranks, grifters, and bigots are, in actuality, the members of the I.D.W.

Other feel the idea that these people are somehow not “mainstream” is an enormous misstatement.

An alliance of heretics is making an end run around the mainstream — and finding enormous new audiences thirsty to discuss subjects that have become taboo. Meet the New Music: The Beatles, The Stones, and Dylan will *finally* be heard.

"intellectual dark web" appears to be "the normal web, but ignoring the parts where snopes says the claims aren't true"

This isn’t the first time that an opinion piece by Weiss has sparked online criticism and mockery. Weiss wrote a piece for the Times in January that dismissed a woman who alleged that comedian and actor Aziz Ansari sexually assaulted her on a date. She also defended a tweet in which she referenced a line from Hamilton about immigrants while talking about the American-born Olympic skater Mirai Nagasu.

The Intellectual Dark Web is facing criticism not only for the people involved but also for the name of the group. These people don’t have to broadcast their views on the real Dark Web. They are, as Weiss says, active on “podcasts, YouTube and Twitter,” websites and services that anyone can access.