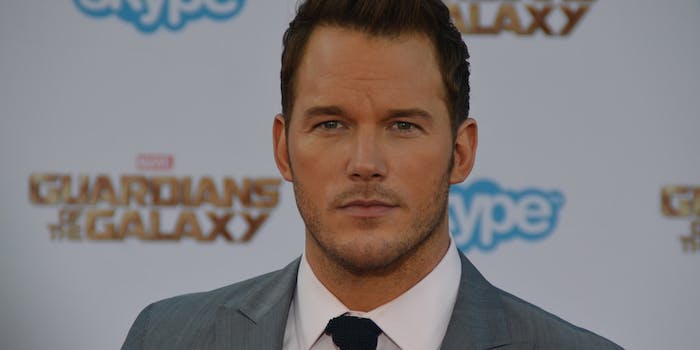 If the ‘Indiana Jones’ rumors are true, get ready for the Chris Pratt backlash

The Internet has a way of making you hate what you love.

Chris Pratt is everywhere right now. The Parks and Recreation star has had an amazing run the past few years, with key roles in Zero Dark Thirty, Her, Moneyball, and The Lego Movie; he capped it off with a star-making performance in Marvel’s Guardians of the Galaxy, which was until recently the highest-grossing movie of 2014. Since America at large “discovered” him, Pratt has been near inescapable on the Internet, challenging Captain America to a Super Bowl rivalry, confessing to BuzzFeed what “superhero names” he gave to his Parks and Rec costars, and generally making being famous look as endearing as a YouTube video of a baby panda sneezing.

Because the Internet loves Chris Pratt, he has—in turn—become the new Hollywood “It Boy,” the male answer to Jennifer Lawrence. After landing the lead in Jurassic World, Disney also wants him to be the face of their new Indiana Jones franchise, which makes perfect sense. After playing a Han Solo proxy in Guardians of the Galaxy, a rogue space outlaw with a certain puckish charm, who better to step into Harrison Ford’s shoes than someone who has already mastered the archetype? However, the choice speaks less to Pratt’s ability to fill Ford’s fedora than Hollywood’s struggle to create a variety of bankable stars in an age where YouTube is taking over. If you can’t make new celebrities, use the same ones we like over and over again, and we adore Chris Pratt, at least for now. But the Internet has a way of making you hate what you love.

A bombshell survey published last August in Variety showed just how desperate Hollywood is for the next big thing, as they’re quickly losing teens to the Internet. The popular industry publication surveyed American teens ages 13-18 to find out which celebrities appealed to them—and YouTube stars handily beat their Hollywood counterparts. Of the 20 most popular celebrities among teenagers, only nine of them were Hollywood actors (one was pop singer Katy Perry); the top five were all YouTubers, including Smosh, the Fine Bros., and PewDiePie. The most well-liked actor was the late Paul Walker (at No. 6), while the Internet’s dream girlfriend Jennifer Lawrence placed seventh.

I showed my brother photos of very famous Hollywood celebrities. He couldn’t guess a single one.

I fact-checked this information with the only actual human teens I know—my brothers. I showed pictures of a slew of famous people to my youngest brother, who is the Variety survey’s typical teenager: He’s well-versed in YouTube and Internet culture but pays less attention to mainstream Hollywood than previous youth generations, who relied on beach party movies and stories of teen rebellion for entertainment. My brother simply has other options. I showed him photos of very famous Hollywood celebrities, the kind of folks who would be instantly recognizable to 95 percent of people my parents or I grew up with, like Tom Cruise, Julia Roberts, Will Smith, Leonardo DiCaprio, and Tom Hanks. He couldn’t guess a single one.

I was determined to press on. I showed him people I considered easy ones—total gimmes. Britney Spears. He recognized her but couldn’t come up with a name. Jennifer Lawrence? Same problem. Beyoncé? He had never heard of her. At that point, I lost it: “How the hell don’t you know who Beyoncé is?” My grandmother quickly interjected: “Kids these days are different. They don’t like the same things you do.” “I’ll say,” I thought. Finally after flipping through about 10 or 15 other celebrities, I came up with one he knew: Johnny Depp, whom he recognized from the Pirates of the Caribbean movies. Those, of course, stopped being good a decade ago, along with the rest of Johnny Depp’s career.

Chris Pratt’s increasing fame when it comes to this demographic is likely what makes him in such high demand. Like Depp before him, his presence in the rebooted Jurassic and Indiana Jones series will give him wide visibility among a youth audience that the film industry is still struggling to penetrate. While Divergent, The Fault in Our Stars, Twilight, and The Hunger Games have proven the bankability of the YA market, the nascent genre has as many disasters as it does successes—remember The Host and Beautiful Creatures? What about Mortal Instruments: City of Bones? In an industry filled with few safe bets, Chris Pratt is becoming as sure a thing as you can get.

Conventional wisdom suggests that there’s no such thing as bad PR, but in the industry, there’s definitely such a thing as too much PR.

While the Daily Dot’s own Gavia Baker-Whitelaw suggested last September that the “Chris Pratt marketing machine” was a product of Marvel’s brand smarts when it comes to its actors; conventional wisdom suggests that there’s no such thing as bad PR, but in the industry, there’s definitely such a thing as too much PR. Just ask Benedict Cumberbatch, who has been facing a recent backlash (and it’s not just those unfortunate “colored” comments). After the actor was cast as Doctor Strange, the Internet reportedly reached “peak Cumberbatch,” the point when his ubiquity started to become downright annoying. While Cumberbatch is a great Sherlock and he was good in the otherwise forgettable Star Trek Into Darkness, he doesn’t need to be shoehorned into everything, and his miscast role in the misbegotten August: Osage County just felt like trying to make fetch happen.

This happens to actors every once in awhile, where we all discover we love them at the same time—thus, the Internet beats them into the ground until they’re think-pieced to death. A surge of post-Notebook Ryan Gosling fandom turned his “Hey Girl” meme into the Web phenomenon even your mom understood, and the McConaissance posed one of life’s most important existential riddles: “Why are actors so bad in some movies and then so good in others?” While McConaughey looked effectively emaciated Dallas Buyers Club, it wasn’t starvation that won him that Oscar—it was Internet fandom. After McConaughey’s “all right, all right, all right” speech at the Golden Globes became an instant meme, he was simply too big to deny the trophy. He couldn’t be stopped.

You better get used to seeing Benedict Cumberbatch and Matthew McConaughey: They’re slated to be in a combined 11 movies over the next few years, while others chart a more sustainable course. Gosling only has two movies on his slate, and one of them is a Terrence Malick movie, which means it’s a coin flip whether it’ll actually come out anytime soon. Joseph Gordon-Levitt has two movies hitting theaters this year, a Seth Rogen-starring Christmas comedy and Robert Zemeckis’ The Walk, with an Edward Snowden movie in pre-production. As soon as Jennifer Lawrence felt she was becoming overexposed, she wisely took a step back, all but sitting out last year’s Oscar race. Not even J-Law wanted to see her win two times in a row.

It might seem cool to hold Indy’s whip, but it’s just as likely he’ll end up the Web’s new whipping boy.

Hollywood might be desperate to make Chris Pratt happen right now, but he doesn’t have to happen all at once. Pratt got to where he is now by balancing smaller projects like Spike Jonze’s wonderfully weird technological romance fable and Kathryn Bigelow’s thrilling hunt for Osama Bin Laden along with larger tentpoles; it’s a formula that has kept George Clooney afloat even as his movies sank (see: Batman and Robin). At a time when the double-edged sword of Internet fame has led actors like Kristen Stewart to quietly bow out of the system entirely, Pratt would be wise not to answer Disney’s call. It might seem cool to hold Indy’s whip, but it’s just as likely he’ll end up the Web’s new whipping boy. Look at what happened to Shia LaBeouf.

If I were to play the celebrity picture game with my brother again five years from now, he would likely be able to name Chris Pratt right alongside Johnny Depp. But I’m not sure if that’s what anyone wants, including Chris Pratt.